N.J. among the worst states for high numbers of C-sections

The number of first-time mothers who end up delivering by C-section remains stubbornly high in New Jersey, as the state continues to be above the national average on the metric.  Although the medical community has been trying for years to reduce the... 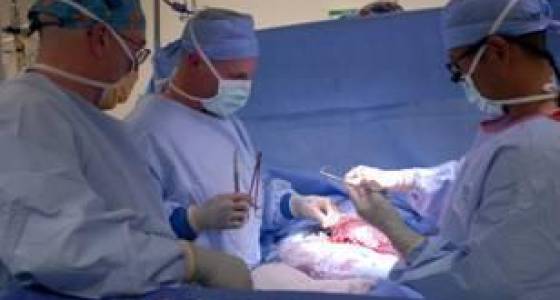 The number of first-time mothers who end up delivering by C-section remains stubbornly high in New Jersey, as the state continues to be above the national average on the metric.

Although the medical community has been trying for years to reduce the reliance on Cesarean sections, that message isn't registering equally across the country, said The Leapfrog Group, a non-profit group that focuses on hospital safety.

New Jersey was tied for the fifth in the number of states with the highest rates, with only Florida, Louisiana, Texas and Virginia coming in worse.

There was a lot of variation within the state, though, as some hospitals have made lots of progress, others very little. The report noted there was little difference between urban and rural hospitals, as well as teaching and non-teaching hospitals. That meant the scores couldn't be blamed on any hospital's burden of having to treat sicker communities.

"I think it's a very physician-driven pattern and practice. I don't think women are giving it much thought. So change has to come from within," said Linda Schwimmer, CEO of the New Jersey Health Care Quality Institute and a member of the Leapfrog board of directors. "That's really what's needed to get those numbers down."

She cited Monmouth Medical Center in Long Branch, which she called a "poster child of success" for lowering its C-sections rate. All obstetricians enter medical records in the same database, making it easy to tell which doctors might resort to a C-section too quickly.

"That physician gets pulled aside and spoken to," Schwimmer said. "They talk about what's going on, and they work to make a change."

Hospitals that beef up staff so labor physicians and nurses are available round-the-clock also see a drop in C-sections as obstetricians become more willing to let a woman labor longer, knowing help will be available if needed.

C-sections can be medically advisable, and are often done for the birth of a second or third child if the first baby was born that way. The Leapfrog survey looked solely at births to first time mothers of single babies - not twins - that were in the conventional head-down position.

C-section benefits have to be weighed against potential complications, which include blood clots, increased risk of infection and longer recoveries for the mother, breathing difficulties and increased risk of chronic childhood diseases for babies.

The report also looked at how well hospitals were doing in bringing down the number of what it calls "early elective deliveries." Those are babies born early through inducing or scheduled C-section when there appears to be no medical reason to do that.

"There's plenty of medical evidence that it's not in the best interest of the mother or the child," Schwimmer said. "So the rate should be zero."

The national goal is for only 5 percent of labors to go that route.

One statistical outlier was Meadowlands Hospital Medical Center in Secaucus, where nearly two out of every three women gave birth early for no apparent medical reason, according to the report.

That was the highest rate in the nation, according to Leapfrog.

Meadowlands' rate was 61.4 percent, according to Leapfrog.

"Essentially this is a center for scheduling births," Schwimmer said.

The hospital did not respond to requests for a comment or explanation.

Last year, a story by NJ Spotlight noted that the 204-bed, for-profit hospital was advertising on Russian websites for pregnant women to come to the United States, come to the hospital for childbirth, then return to their home countries.

Overall,  New Jersey did well at avoiding medically unnecessary early deliveries: 28 of the hospitals saw fewer than 1 percent of their births fall into this category.

New Jersey hospitals were "phenomenal" in their willingness to share their data, making them tops in the nation for participation in the Leapfrog analysis, Schwimmer said. "Health plans and employers have said to them, 'Hey, we want this information. It's important for people to know."'