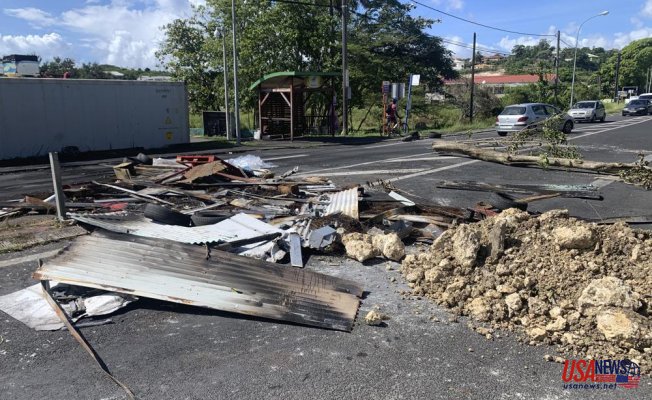 Patrick Portecop (head of the regional emergency services) tweeted that "We have many patients" in La Boucan's blockaded area. "We are powerless."

Guadeloupe's education ministry ordered all schools to be closed Monday, "taking into consideration the situation," and asked parents for their permission to keep their children home.

Guadeloupe is an overseas French French department with approximately 400,000 inhabitants. They protested France's compulsory vaccinations for health workers and the COVID-19 French health pass that allows them to enter many restaurants and other venues in France. Local authorities say that an 80-year old woman was shot while sitting on her balcony. At least two other people were also injured in the riots.

Similar protests have been held in France, but demonstrators in Guadeloupe are angry about deep-rooted economic, social, and racial inequalities. They have increased their demands to include general salary increases, higher unemployment benefits, and the hiring more teachers.

Guadeloupe's COVID-19 vaccine rate is 33%, while it is 75% nationally. Authorities attribute this to false information on vaccines that has been shared online. A history of health scandals has also led to distrust in central authorities.

Pointe-a-Pitre's mood changes from one street to the next. Major roads are being cleared by police of blockades that make it difficult to move for several days. The smell of electrical and burning garbage wafts up. Broken glass, nails, and tree trunks littered the streets as a woman looked through the charred remains her home.

Striking workers set up a camp outside the main hospital against mandatory vaccinations for healthcare workers. They also ask that sympathizers bring food.

Guadeloupe's president Ary Chalus decried the looting. He said that "we cannot destroy what we built together" and complained on regional television about the inability of the central government to respond to economic assistance requests "as quickly as they sent law enforcement" to stop the rioting.

"There is an explosive situation, but there is also a local context. French President Emmanuel Macron stated Monday that tensions exist that we are aware of that are historical.

He encouraged people to believe that the vaccine provides the best protection and not to fall for lies or manipulation. Public order must be maintained. Guadeloupe is entitled to tranquility.