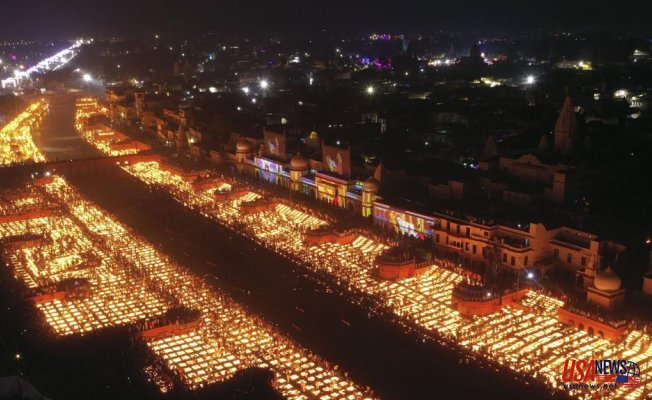 Diwali is a celebration that involves exchanging gifts and socializing with friends and family. Light oil lamps and candles are lit to signify victory over darkness. Fireworks are also set off during the celebrations.

Last year, celebrations in India were disrupted by an increase in COVID-19 infection. But festivities seem to be back this year. Despite being asked by the government to avoid large gatherings of people, markets are bustling ahead Diwali with eager shoppers buying lanterns, flowers and candles.

Over 900,000 earthen lamp were lit in Ayodhya, Uttar Pradesh, on Wednesday at dusk. They burned for 45 minutes, keeping the Guinness World Record that was set last year. The city lit 606,569 oil lamps last year as part of Diwali celebrations.

Ram ki Pauri was the location where the lamps were lit. This spectacular spectacle attracted thousands of people who ignored coronavirus social ditancing norms and thronged its shores. The city was illuminated by a laser and fireworks display. Many city residents lit lamps in their homes and temples.

This festival is celebrated in a period when India's pandemic crisis seems to have subsided.

On Thursday, India recorded more than 12,000 coronavirus infections and 461 deaths. This is a far cry of earlier this year, when India was suffering from a few hundred thousand new infections per day. According to the Health Ministry, the country has seen more than 35,000,000 infections and 459,000 deaths. These numbers, like many others, may be undercounted.

Even those states that were prone to infection a few weeks back, like Kerala on the tropical Malabar Coast have been experiencing a steady decline. India celebrated the administration of its billionth COVID-19 vaccination dose last month, further increasing confidence in life's return to normal.

Experts warn that festival season could lead to an increase in infections if COVID-19 measures are not enforced.

Air pollution is another concern. It typically covers northern India in a grey smog as the temperatures drop and winter sets in.

People lit up the sky on Diwali night with firecrackers, causing pollution that can take days to clean.

Although there is not a nationwide ban on the bursting of firecrackers in all states, some states have placed restrictions to reduce pollution. Some allow residents to light green crackers only for a set amount of time. Green crackers emit less pollution than regular firecrackers. Similar bans were often ignored in the past.