Amanda Harrison sometimes gets overwhelmed by emotion while feeding her baby girl. Sometimes she has to wipe out tears of gratitude. She is blessed to be holding her baby. 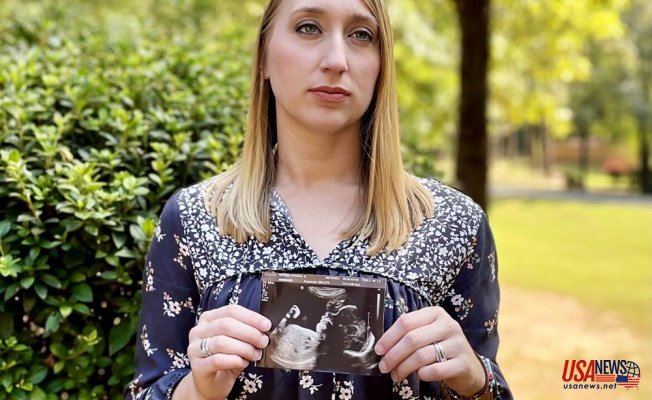 Harrison was 29 weeks pregnant and had not been vaccinated when she contracted COVID-19 in august. Although her symptoms were initially mild, she soon felt that she couldn't breath. She was born in Phenix, Alabama. After being intubated, she was flown to Birmingham. There, doctors delivered baby Lake two weeks early and placed Harrison on life support.

Kyndal Nipper is a Kyndal Nipper from outside Columbus, Georgia. She had a short bout with COVID-19, but it led to a much more tragic end. When she lost her baby, which she and her husband had planned to name Jack, she was just weeks away from giving birth.

Harrison and Nipper now share their stories to convince pregnant women to get COVID-19 vaccines to protect their baby and themselves. These warnings came amid an increase in severely ill pregnant mothers that saw 22 women die from COVID in August, a record for the month.

Harrison stated that she would "nicely argue until the bitter end" for pregnant women to get vaccinated, "because it could literally spare your life."

According to the U.S. Centers for Disease Control and Prevention, since the pandemic started, there have been more than 125,000 cases and 161 deaths among pregnant women who contracted COVID-19. In the last few months, doctors and hospitals in hot areas have seen a dramatic increase in severely ill pregnant women.

The CDC issued an urgent advisory to pregnant women on September 29 urging them to get vaccinated. Only 31% of all pregnant women in the country are currently vaccinated. The agency warned that COVID-19 can lead to preterm births and other adverse outcomes in pregnancy. Stillbirths have also been reported.

Assistant professor at the University of Alabama at Birmingham's maternal-fetal medicine department, Dr. AkilaSubramaniam said that the hospital witnessed a significant increase in critically ill pregnant mothers in July and August. According to her, a study by the University of Alabama at Birmingham found that the delta variant COVID-19 was associated with higher rates of severe illness in pregnant women and higher rates of preterm births.

Is it that the delta variant is more infectious, or because the severity of delta is greater? Subramaniam stated that he doesn't believe we have the right answer.