Your CMS fifth grader’s big uptown arts trip is off. Here’s why.

If you have fifth graders in Charlotte-Mecklenburg Schools, this was the month for them to see a special concert at Belk Theater: “Endless Possibilities,” where the Charlotte Symphony Orchestra, Charlotte Ballet and Opera Carolina came together to give... 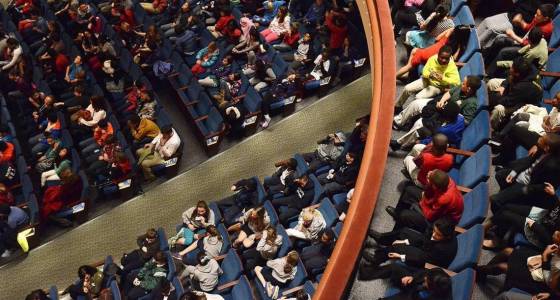 If you have fifth graders in Charlotte-Mecklenburg Schools, this was the month for them to see a special concert at Belk Theater: “Endless Possibilities,” where the Charlotte Symphony Orchestra, Charlotte Ballet and Opera Carolina came together to give youngsters a taste – often their first taste – of the fine arts.

But “Endless Possibilities” has ended.

The program that served 11,000 students a year has been cancelled for the 2016-17 school year and shows no signs of coming back to life.

“It’s a shame to lose this (event),” says symphony president and CEO Mary Deissler. “It’s important for kids to hear an orchestra live, to come to a performance space they don’t visit, even just to come uptown and get out of the small radius of their neighborhoods.”

The symphony started doing its own educational shows in 1951; by the time education director Chris Stonnell arrived in 2006, it was doing 12 shows per year for all fourth and fifth graders in CMS. Funding came from both the schools and the Arts & Science Council. The financial crisis in 2009 eliminated school funding for these field trips; the CSO dropped to two shows and had to charge a small ticket fee to keep the concerts going.

“Since CMS no longer provided funding for transportation or ticket fees, very few CMS schools continued to attend,” says Stonnell. “Today the audience is more than half comprised of home, private, charter, religious or public schools outside of CMS.”

Yet “Endless Possibilities” became a beacon.

Barbara Ann Temple, the ASC’s vice president for education, brought together the three arts organizations and CMS in 2013 to create programs that aligned with the schools’ Common Core program. The ASC built curriculum, so lessons led up to this experience and followed it.

“The arts partners have been phenomenal,” she says. “They charged only what it actually cost them to do the performances. For the first couple of years, the ASC was funding those partners and covering transportation costs for all fifth graders, which averaged $26,000.” (The total cost of the event came to $100,000.)

In 2014, after raising $800,000 less than it hoped in the annual fund drive, the ASC could no longer underwrite trips. Family Dollar CEO Howard Levine stepped up with backing for 2015 and 2016. But the ASC board voted last November not to solicit private funds for grade-wide field trips, and the schools didn’t get back in the game.

What could change things? Obviously, restoration of funding by either the schools or a deep-pocketed donor. Deissler says the CSO could start fundraising separately for such a concert and build it into a future budget.

Temple stays optimistic. The ASC still provides money for in-school performances by singers, dancers and musicians, and she’s ready to reconvene with her arts partners at any time for the big show:

“The beauty of ‘Endless Possibilities’ is that it’s timed for fifth graders about to sign up for electives in middle school. It taught them what they could do when they grew up. They could see people of all ages reflecting their community and say, ‘Wow – I could do that.’ ”