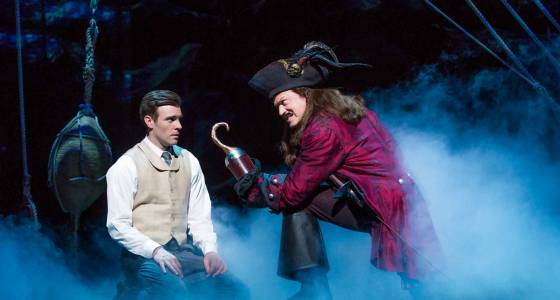 While watching the movie “Finding Neverland” with her young daughters, Tony Award-winning director Diane Paulus knew it belonged on stage. It had all the elements inherent in a musical: theater, imagination, emotion.

The national tour of “Finding Neverland,” now at the Hollywood Pantages Theatre through March 12, is a singing, dancing and playful reimagining of Marc Forster’s 2004 film based on the Allan Knee play “The Man Who Was Peter Pan.” It tells the story of J.M. Barrie and his friendship with the widow Sylvia Lewellyn Davies and her boys, who would inspire his most enduring work.

For Paulus, it’s the first of two national tours opening at the Hollywood Pantages this season — the other is “Waitress,” which is still on Broadway.

Of course she’s got other irons in the fire, including tours of “Pippin” and “Amaluna: Cirque du Soleil.”

Q: You have so many productions running at the same time. Is that typical for you?

A: What happens is they accumulate, actually. Some of these shows I created several years ago so it’s a wonderful moment when something that originates and incubates at (American Repertory Theatre) gets a chance to have a life on Broadway. And, of course, I’m always looking forward to the moment these shows can go out across America and get this long life.

Q: What hooked you on “Finding Neverland?”

A: In so many ways, this story is a love letter to the theater and what it takes to create something that breaks boundaries or takes us to where we’ve never been, which “Peter Pan” did. Children fly, boys never grow up and there are mermaids. In the film, you go inside J.M. Barrie’s imagination. You see the kids playing in the backyard and then the movie switches, and suddenly they’re on a real pirate ship. But the other piece was its deep emotional pull. All those things beckoned me and made feel want to throw myself into this heart and soul.

A: Whenever you adapt a film to a musical theater form, you have to change it. You can’t just put the film on stage. Theater has a different heart beat, structure and sense of time.

Q: J.M. Barrie’s story has its share of adult moments, including when his wife has an affair. How do you tell that story and still keep it family friendly?

A: We focus on the themes of imagination and the power of creativity to harness your true self and release it into the world in the most powerful way. For me, those are the juicy themes that make our story deep.

Q: Do you have any favorite moments?

A: One of my favorite moments is when Captain Hook comes to J.M. Barrie as a sort of alter-ego. J.M. Barrie is scared because he doesn’t think he can write this crazy story. Nobody believes in him. But Captain Hook comes to him and says, “Go back to what everyone expects of you or have the courage to fight.” It’s done through a fictional character in his psyche, but I think we all have that moment in our lives where we hit a crossroad. You can experience that when you’re 8 years old, when you’re 40 years old, when you’re 60 years old. That’s the appeal of “Peter Pan.”