Writer ready to take on Fittest Loser challenge, too

I often describe myself as "a military historian temporarily forced to work as a journalist for 40 years."But not until a week ago did anyone refer to me as a journalist embedded in the military.No, I wasn't anywhere near a battlefield. I was attending... 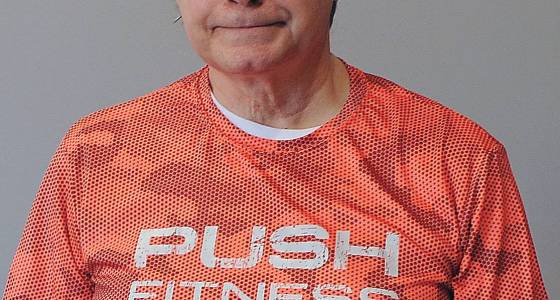 I often describe myself as "a military historian temporarily forced to work as a journalist for 40 years."

But not until a week ago did anyone refer to me as a journalist embedded in the military.

No, I wasn't anywhere near a battlefield. I was attending the first Saturday-morning "boot camp" and weigh-in for this year's Fittest Loser contest.

As I showed up to interview the four veterans competing, one called out, "There's our embedded journalist!"

That was quite an honor.

I have been fascinated by veterans and history -- especially World War I and World War II -- since I was a kid in Elgin in the 1960s.

When our eighth-grade reading teacher at Abbott Junior High asked me to do an extra-credit research project, I wrote a 10,000-word paper about the naval battles around Guadalcanal.

I have written similar treatises about "The Kaiser's Generals" and the Battle of Leyte Gulf. I play board war-games and even have invented a couple. And since becoming a reporter, I have interviewed practically every veteran I could find from the world wars and Korea, beginning with the last half-dozen guys who went to war from Elgin in 1918.

This year's Fittest Loser zeros in on veterans. So when Paddock Publications Vice President M. Eileen Brown began looking for a reporter to write weekly stories about the contest, she asked whether I was interested. I said, "Sure."

She added that, though it isn't required, most of the past Fittest Loser reporters have exercised and dieted along with the contestants. Would I like to do that now at age 64?

I answered, "Yes. Sort of." And I began wondering how much weight I had piled on through the years.

I went upstairs and opened the little toy safe where I had stowed away the precious documents of my childhood. Among them was the draft registration card issued to me after I graduated from Larkin High School, as the Vietnam War was just beginning to wind down.

In those days about a third of guys were being drafted, and the order in which they were taken was based on how low a number was drawn, corresponding to their birthday in an annual "draft lottery." My number turned out to be 334 out of a possible 366. I never was drafted and didn't enlist.

But that wasn't why I wanted to find that beat-up old draft card. There was something else I was looking for. Some information about me from Sept. 2, 1970. Height: 5 feet 7 inches. Weight: 125 pounds.

I have gained a couple inches since then. But when I step on the scale now in my underwear, it reads more like "193."

I realized I have gained almost 70 pounds -- half a human being -- since high school.

True, in school I was a nerdish, rail-thin geek, ignored by girls and picked last for all the teams in gym class. I definitely could have stood to gain some muscle mass.

And I insist that what my wife describes as "man boobs" is just pectoral muscles. But that 70 new pounds can't all be muscle.

So I sacredly commit myself to doing the exercise required of the four contestants through all 12 weeks. I actually kind of enjoy exercising and have done a lot of it through various stretches of my life.

And I will try the strict nutrition program (he doesn't like to use the word "diet") recommended for us by Push Fitness owner Josh Steckler.

But no promises I will be able to stick to the new eating plan. To put it mildly, that would involve drastic changes in how I have eaten for 64 years.

I'll get into more details in a future column. But a few hints: I'm the great-grandson of farmers and the grandson of a dairy owner. My body thinks the main food groups are meat, salt and sugar. And sometimes as a snack I'll eat just a bare bun with a handful of potato chips while drinking a Coke.

But hmmm. That also has been packing on 70 pounds of excess Dave.

Talk to you again next week.