World War II Museum captures all that was gained, and lost, in a conflict that still fascinates

There may come a time when World War II ceases to be a source of fascination for millions of Americans, but for now, the subject matter continues to inspire historians, novelists, screenwriters — and everyone who is glued to the American Heroes Channel.Perhaps... 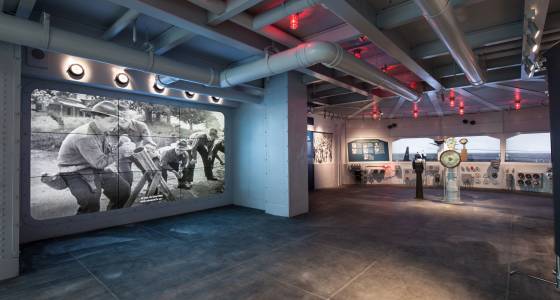 There may come a time when World War II ceases to be a source of fascination for millions of Americans, but for now, the subject matter continues to inspire historians, novelists, screenwriters — and everyone who is glued to the American Heroes Channel.

Perhaps you’re reading “All the Light We Cannot See” or “Countdown to Pearl Harbor” or streaming the movie “Allied” in 4K Ultra HD. You may even be contemplating a visit to this city's National WW II Museum, a sprawling campus that offers still more evidence of our obsession with a conflict that ended more than 70 years ago.

During a recent trip that was dedicated (primarily) to the pursuit of a bacchanalian experience, I suggested to my husband, Steve, that we spend an afternoon focused on history rather than indulgence. It turns out that three hours of immersion in battles, weapons and war memorabilia was a welcome break from the festivities.

The facility, founded by historian Stephen E. Ambrose, opened in 2000 as the D-Day Museum and was later designated by Congress as the official World War II museum of the country.  Since its opening, it has continued to grow in size and ambition — more than 30,000 square feet in exhibit space added in the last couple of years, and there are plans for a hotel and conference center as well.

We visited on a Monday holiday, but the museum was humming with the murmurs of scores of visitors, most of whom couldn’t seem to get enough of the touch screens, videos, voiceover narration, maps, artifacts and newsreels. (The museum estimates 2016 attendance at 700,000.)

The 300,000-square-foot complex is large, taking up about 3½ blocks in New Orleans’ Warehouse & Central Business District. Visitors can sit through a “Beyond All Boundaries” video in the Solomon Victory Complex and walk through the Louisiana Memorial Pavilion. They can indulge their interest in nostalgia at the gift store or dine at the American Sector restaurant.

But on the afternoon of our visit, most museum-goers could be found in the Campaigns of Courage pavilion, a 32,512-square-foot building that houses the “Road to Berlin” exhibit, which opened in December 2014, and  “The Road to Tokyo,” which opened a year later.

The Crescent City has long been a lure for epicures, a place where the cuisine has been informed by centuries of new arrivals...

The Crescent City has long been a lure for epicures, a place where the cuisine has been informed by centuries of new arrivals...

The exhibits are presented chronologically, with maps of major battles and sites, models of bunkers and Quonset huts and a mockup of the bridge of the USS Enterprise.  You can look at newsreel footage and photographs or pick up a “dog tag” that will unlock an interactive exhibit devoted to an individual (a service person or civilian) who participated in the war.

The visitors who toured with us, many of them elderly, some of them sporting veterans’ caps, lingered at many of the exhibits as if they were inspecting a shrine. The occasional young man wandered through looking for a specific entry point — a battle, perhaps, or a weapons exhibit.

Couples walked by hand in hand, talking about parents or  grandparents who served, an acknowledgment of the individual sacrifices that are bound up in the costs of war. Some of the objects on view — a telegram announcing the death of a  son, a dented cigarette case that deflected a bullet, a vase discovered amid the ruins of Nagasaki, Japan — speak to those sacrifices as well, in a way that the detailed chronicling of military campaigns or displays of aircraft or weapons can never do.

Another touchstone to the war will open April 1 when a wartime patrol torpedo boat that saw action in Europe goes on display. Volunteers spent a combined 10,000 hours at the museum restoring PT-305, which you will be able to tour for $15. Forty-five minute rides on Lake Pontchartrain in the historic boat cost $350.

If you visit the museum, you will probably listen to excerpts from the thousands of oral histories collected from men and women whom the war touched in some manner. They were young — 17 or 23 or 27 years old — and most of them had no understanding of what was about to befall them.

They served in Italy or Okinawa or they worked in wartime factories or spent time in a Budapest ghetto.  Long after your visit has concluded, their survival and willingness to testify may be the thing you will remember the most.