Why 'La La Land' is more deserving than Oscar-winning 'Artist'

Five years ago, a movie came out of nowhere to reclaim a moribund genre, and to celebrate the glamour and charismatic power of LA's show business fantasies and realities.This was an industry movie, patting itself on the back, heartily. And since the Academy... 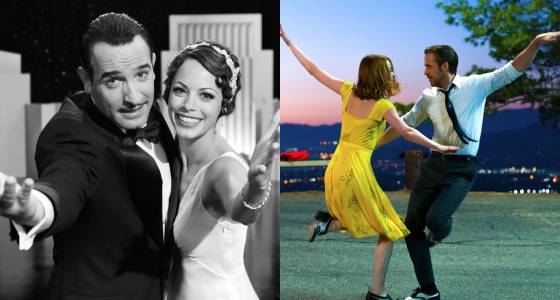 Five years ago, a movie came out of nowhere to reclaim a moribund genre, and to celebrate the glamour and charismatic power of LA's show business fantasies and realities.

This was an industry movie, patting itself on the back, heartily. And since the Academy of Motion Picture Arts and Sciences voting membership has a track record of supporting stories about the triumph of the cinematic spirit, the film in question ended up winning best picture of 2011.

Today "The Artist," from the French writer-director Michel Hazanavicius, resembles something halfway between a fluke and a mirage. It's a virtually silent picture: Silent except for one sound gag in a dream sequence, and a musical epilogue.

The film takes place in the Hollywood era prior to, and just following, the talkies. Its star, Jean Dujardin, and his co-star, Berenice Bejo, provide the charm, his more gently satiric than hers. (Dujardin won an Oscar, as did his director.) And the dog, Uggie, doesn't hurt. He may, in fact, be the reason it won the Oscar.

I've heard a lot of comparisons made in recent weeks between "The Artist" and this year's dominant Oscar nominated picture, writer-director Damien Chazelle's "La La Land." Some similarities exist. It, too, reclaims a genre, in this case the full-on, song-and-dance movie musical. It, too, is a movie about movies, and LA showbiz, its allure and its capacity for heartbreak.

While Barry Jenkins' exquisite "Moonlight" may well have risen sufficiently in the estimation of this year's Oscar voters to win the top prize Sunday, at the 89th Academy Awards ceremony, "La La Land" retains the oddsmakers' favor going into the final lap, for many reasons.

One reason, probably, is financial, because few movies get anywhere Oscar night unless they made money en route. Chazelle shopped "La La Land" around town, looking for backers, for years, and then Lionsgate put up $30 million. To date the film has grossed $340 million worldwide. ("The Artist," which cost roughly half to produce, did well, too, though it topped out at $133 million, making most of its money overseas, as has "La La Land.")

Is "La La Land" a stunt, a novelty item, the way "The Artist" was? Sort of, but it's also a lot more than that. And here the comparisons between these two pictures fall apart.

Visually, "The Artist" — which I liked without quite loving — is the work of a moderately talented magpie, pulling ideas from all over the place, somewhat artlessly. Hazanavicius deploys many of the most familiar silent film techniques (the iris shot, the title card) without ever quite activating his camera, or settling on a specific silent film aesthetic. The movie doesn't look like anything in particular.

"La La Land" has a magpie sensibility as well, but Chazelle is working on an entirely different level. The stars of his musical are Emma Stone (terrific), Ryan Gosling (working to the best of his abilities) and Chazelle's camera (assured, sweeping, instinctively right). Even when "La La Land" directly references visual aspects or moments from musicals past, from "An American in Paris" to "Singin' in the Rain" and "The Band Wagon," and especially to the Jacques Demy confections of the 1960s, he's doing so in ways that help the movie at hand. His film does not play like someone thumbing through a notebook for ideas.

Unlike "The Artist," "La La Land" is essentially sincere, rather than cleverly facetious. And while "The Artist" was never going to pave the way for a rediscovery of the silent film genre, "La La Land" proves that an unapologetic musical can find a large international audience. And it doesn't have to jump up and down every second cinematically, the way Baz Luhrmann's "Moulin Rouge!" did.

When "The Artist" went into wide release, months after its triumph at the Cannes Film Festival, I heard from many folks who enjoyed it, and who enjoyed Dujardin in particular. I also heard from plenty of people who told me they felt no need to see it. They didn't see the point in giving a silent movie a try in the early 21st century. Too remote, or gimmicky, or something.

The debates swirling around "La La Land" are more compelling. Writing in the Hollywood Reporter, Kareem Abdul-Jabbar managed to collate and advance various charges others have made against Chazelle's film. He writes on the subject of race, on the reading of Gosling's character serving as a "white savior" of jazz in relation to the John Legend character representing an African-American sellout. He writes of the movie's binary tendency to view career ambition and romantic fulfillment as an either/or proposition.

And he does all this while acknowledging how much he enjoyed "La La Land," despite his reservations.

"I know I'll be watching it again and again over the years," Abdul-Jabbar wrote, "just as I'll be listening to the wonderful soundtrack."

"The Artist" entertained plenty of moviegoers, and introduced younger ones to their first silent film. But it provoked not a single intriguing argument, beyond its dubious use of Bernard Herrmann's "Vertigo" score. "La La Land," perceived as the safe, establishment Oscar choice this year, is a different story. It's legitimately controversial, which is a very good sign.

What Chazelle has asserted in "La La Land" is pretty simple, really: Love is not enough. A director's camera is a dance partner, even when no one's dancing. Knowing how, when, where and why the camera should move demands careful thinking about the visual personality of a film. There are shots, defiantly unflashy, in "La La Land" so beautifully executed and perfectly timed and fluidly achieved that I couldn't wait to see them again.

"Moonlight" may be my favorite film in contention. But Chazelle and his composer Justin Hurwitz are two of my favorite talents of 2016, and their movie is a living, breathing creation worthy of every debate it has spurred.

The 89th Academy Awards ceremony will be broadcast at 8:30 p.m. Eastern on Sunday on ABC.

Michael Phillips is a Tribune critic.