Well, that was the best Oscars ever

We all expected the Oscars to get political. What we didn’t know was that we’d all witness the pop-culture equivalent of “DEWEY DEFEATS TRUMAN.”Warren Beatty looked puzzled as he opened the envelope containing (or so he thought) the name of the winner... 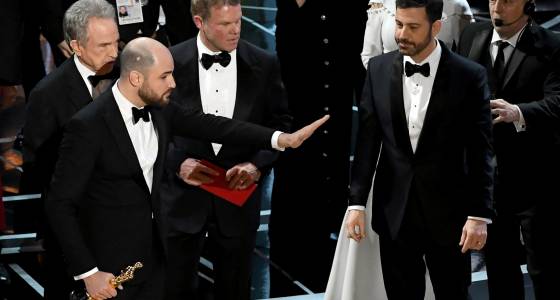 We all expected the Oscars to get political. What we didn’t know was that we’d all witness the pop-culture equivalent of “DEWEY DEFEATS TRUMAN.”

Warren Beatty looked puzzled as he opened the envelope containing (or so he thought) the name of the winner of the Best Picture Oscar. But that’s nothing to do with his age (79). Warren Beatty has always looked puzzled. Looking puzzled made him one of the most adorable leading men of the 1970s, and one of the most famed ladykillers in Hollywood history. As the critic Clive James once put it, “Beatty’s acting style was based on modifications to a basic look of puzzlement.”

But this was something different: Beatty apparently had the wrong envelope. Puzzled beyond puzzlement, he peered and squinted and finally handed the envelope to his “Bonnie and Clyde” co-star Faye Dunaway, who read the fateful words “La La Land.”

Hey, way to let your lady take the bullet for you, Warren!

We were several minutes into the thank-you speeches when — oopsie! Let’s just say the last time we were all this surprised, Hillary Clinton was biting the top off a bottle of the hard stuff. Millions must have gone to bed already: The Oscars were over except for a few thank-yous. Or so it seemed.

When “La La Land” producer Jordan Horowitz interrupted his own crew to say “Moonlight” had actually won Best Picture, it at first seemed like a dull replay of the Grammy Awards, where Adele said Beyoncé deserved to win and almost (but not quite) said she was going to give Lady B the award.

But — hey! No! — “This is not a joke, ‘Moonlight’ has won Best Picture,” Horowitz said, holding up the card (as though we could all read the tiny writing on our TVs.) The “La La Land” folks suddenly looked as forlorn as the Atlanta Falcons at the end of the Super Bowl.

All those observers who spent three hours saying the Oscars were boring and predictable (OK, me) were made to look foolish.