Famagusta 26°
clear sky
BUSINESS EDUCATION ENTERTAINMENT HEALTH POLITICS SCIENCE SPORTS TECHNOLOGY
03:35 US and Haiti demand release of 17 missionaries kidnapped by gang
16:24 It's risky business: Some Capitol Riot defendants give up lawyers
16:21 Kidnapping missionaries are being blamed on gangs with abducted past members
04:08 Officials label the fatal stabbing of a UK lawmaker terrorist act
00:00 The recalculation of unemployment benefit goes back to the Council of...
16:26 Jan. 6 panel sets vote on contempt charges against Bannon
00:00 Already survivor of a crash, an American fisherman survives after being...
13:59 As inflation rises, Social Security benefits get a big boost
10:53 Next FDA agenda: J&J and Moderna booster shots
15:52 Partially reaffirmed: Pro-Iran parties lose the election in Iraq
BIST
1429.85
GOLD
531.31
USD
9.3166
GPB
12.8714
EUR
10.8583
Breaking News
A study shows that at 30 km/h we pollute more than at 50 km/h: Xavier Bertrand's misinterpretation
Close

There's only one thing people of the internet love more than an absolutely epic mistake on live television - conspiracy theories about how it could have happened.A few hours after Faye Dunaway and Warren Beatty announced "La La Land" as best picture... 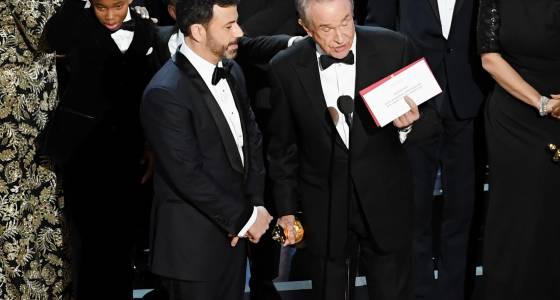 There's only one thing people of the internet love more than an absolutely epic mistake on live television - conspiracy theories about how it could have happened.

A few hours after Faye Dunaway and Warren Beatty announced "La La Land" as best picture at the Academy Awards (when the trophy actually belonged to "Moonlight"), PricewaterhouseCoopers, the longtime accounting firm in charge of the Oscar ballots, took responsibility and released an apology statement. Dunaway and Beatty were apparently given the envelope and card for the best actress category, which read "Emma Stone, 'La La Land.'" Thus, the confusion.

"The presenters had mistakenly been given the wrong category envelope and when discovered, was immediately corrected," the statement read in part. "We are currently investigating how this could have happened, and deeply regret that this occurred."

OK. Sure. But social media had other ideas: What if it wasn't just a simple mix-up? On ABC's official Oscars "After Party" special, before there was more information, host Anthony Anderson also seemed convinced it was all a conspiracy. Here are some of the theories floated in the early hours of Monday morning:

1. This was an especially mean prank from Oscars host Jimmy Kimmel.

The late-night host is famous for his practical jokes, from his YouTube hoaxes (the twerking girl on fire, the wolf at the Sochi Olympics); to urging parents to pretend they ate their kids' Halloween candy; to his holiday prank war with his neighbors, John Krasinski and Emily Blunt. So ... couldn't this just be a way to make his Oscars gig really, really memorable?

2. It's all Leonardo DiCaprio's fault.

Some eagle-eyed viewers noticed that Leonardo DiCaprio, who announced best actress, didn't give Stone her card when she won. Uh oh - could he be responsible?

Later, Stone said she was in possession of the card; which is actually plausible, as there are two cards printed for each category. Either way, time for some suspicions about DiCaprio's role in this madness.

3. This was a prank from Matt Damon on Jimmy Kimmel.

Throughout the entire ceremony, Kimmel mercilessly teased Damon, extending their years-long "feud." Toward the end of the show, the announcer referred to Damon as Ben Affleck's "guest" when they presented an award, and music played over Damon when he started talking. So it looked like Kimmel got the last laugh ... or did he?

Ultra-dramatic, stunning upset victories and twists for the election, World Series, Super Bowl and now this? Maybe the universe is just having some fun.

According to an email I got from a reader, anyway:

"That's what happens when the liberals run things. The end is a huge mess! (smile emoji)"