CaptionCloseLOS ANGELES (AP) — Viola Davis needs to make room in her trophy case.She won the Oscar as best supporting actress for "Fences," a role she originated on Broadway seven years ago for which she won a Tony Award.Davis played long-suffering... 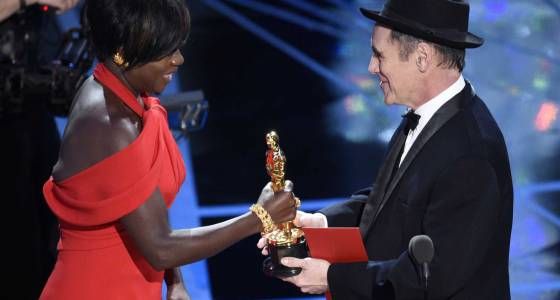 She won the Oscar as best supporting actress for "Fences," a role she originated on Broadway seven years ago for which she won a Tony Award.

Davis played long-suffering Rose Maxson opposite Denzel Washington as her husband Troy, a couple living in 1950s Pittsburgh whose marriage eventually falls apart. The role earned her trophies at the Golden Globes and SAG Awards.

Winning an Oscar for the first time in three nominations, an emotional Davis clutched her statue and saluted late playwright August Wilson, saying the "Fences" author "exhumed and exalted the ordinary people."

She singled out her director Washington, glancing down at him sitting in the front row at the Dolby Theatre.

"Thank you for putting two entities in the driving seat: August and god," Davis said. "They served you well."

The Juilliard-trained actress also thanked her parents, Dan and Mary Alice Davis, who raised her in the impoverished town of Central Falls, Rhode Island.

"I'm so thankful that god chose you to bring me into this world," she said.