It’s been hinted about, but now we have the details: Katsuji Tanabe, the trash-talking L.A. chef from this season’s “Top Chef: Charleston,” will come to Charlotte’s 5Church for “Tacopocalypse,” a cookoff with Jamie Lynch, from 3-5 p.m. March... 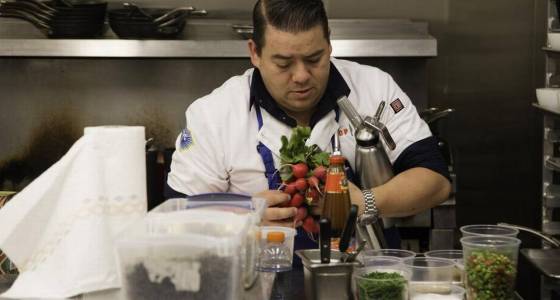 It’s been hinted about, but now we have the details: Katsuji Tanabe, the trash-talking L.A. chef from this season’s “Top Chef: Charleston,” will come to Charlotte’s 5Church for “Tacopocalypse,” a cookoff with Jamie Lynch, from 3-5 p.m. March 18.

Friday update: The tickets are now available at ticketleap.com.

While Lynch got bounced from “Top Chef” in mid-season, he held his own for weeks on the online-only “Last Chance Kitchen,” showing some excellent fast-cooking skills and knocking off Tanabe when he got bounced himself. (The season is now winding down, with the final competitors standing working their way up to next week’s finale in Mexico. Tonight, we’ll get to see which two chefs make it to the last show.)

The Tacopocalypse plan – try saying that after a couple of margaritas – is that the audience will get to taste the food and judge the winner, according to 5Church co-owner Alejandro Torio. Tickets are $10 and the proceeds to the Levine Children’s Hospital.

Meanwhile, if you want to spend a whole bunch more ($150) and drive three hours, you also could go to “Top Chef Alums” dinner at 5Church Charleston on March 2. That’s a five-course tasting menu with wine pairing, also featuring Lynch and Tanabe.