President Donald Trump said the astonishing mix-up at the end of Sunday's Oscars ceremony happened because Hollywood's elites were preoccupied with politics.The president addressed the best picture blunder in an interview with Breitbart News on Monday,... 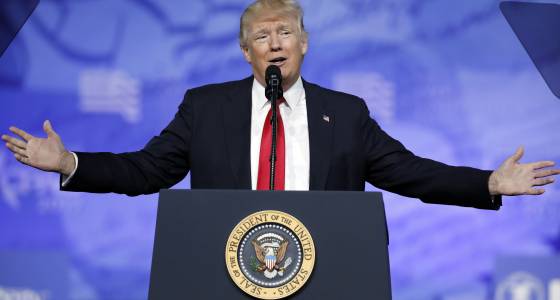 President Donald Trump said the astonishing mix-up at the end of Sunday's Oscars ceremony happened because Hollywood's elites were preoccupied with politics.

The president addressed the best picture blunder in an interview with Breitbart News on Monday, hours after the Oscars telecast ended in a surreal swirl of confusion.

Trump, who was at the White House during Sunday night's Academy Awards, cast a long shadow over the ceremony in Los Angeles, where presenters and winners and presenters made numerous references - some less subtle than others - to the president and his policies without actually mentioning his name.

"I think they were focused so hard on politics that they didn't get the act together at the end," Trump told Breitbart News. "It was a little sad."

Host Jimmy Kimmel also trolled Trump by name in his opening monologue and throughout the night.

"Remember last year when it seemed like the Oscars was racist?" Kimmel joked.

"This broadcast is being watched live by millions of Americans and around the world in more than 225 countries that now hate us," he added.

The host playfully roasted Meryl Streep by calling her overrated - lampooning Trump's criticism of the actress after she slammed him at the Golden Globes last month.

"Meryl Streep has phoned it in in over 50 films over the course of her lackluster career," Kimmel said during Sunday night's show.

He continued: "This is Meryl's 20th Oscar nomination. Made even more amazing considering the fact that she wasn't even in a movie this year, we just wrote her name down out of habit." He then led "a totally undeserved" round of applause for Streep, who has been nominated for more Academy Awards and Golden Globe awards than any other actor in history.

Kimmel doubled down on the trolling on Twitter during the telecast: "Hey @realDonaldTrump u up?"

Others, from presenter Gael Garcia Bernal to Academy of Motion Picture Arts and Science President Cheryl Boone Isaacs, used their time onstage to address the anti-immigrant sentiment that's has been a hallmark of support for Trump.

Trump, who spent part of Sunday night hosting a black-tie dinner for the country's governors, said the politicization of the Oscars took away from the glamour of the ceremony.

"It didn't feel like a very glamorous evening. I've been to the Oscars," he told Breitbart News, which was formerly led by Stephen K. Bannon, now Trump's chief strategist. "There was something very special missing, and then to end that way was sad."

What transpired at the end of the four-hour ceremony could very well be the most shocking Oscars moment ever: "Moonlight" was awarded best picture - but only after "La La Land" was mistakenly announced as the winner.

By the time "the biggest mistake in Academy history" was addressed, "La La Land's" producers had already given their acceptance speeches for an award that wasn't for them.

How do your own Oscar red-carpet hits and misses stack up? Click through our gallery of favorite and not-so-favorite looks fresh from 89th Academy Awards. And for a running commentary of the night's activities, visit our Oscars 2017 live updates and find out what Times Deputy Fashion Editor Adam Tschorn wrote about this year's Oscars fashion.

Officials with PricewaterhouseCoopers, the longtime Oscars accounting firm, have since apologized for the error.

After opening the envelope - and realizing it was for the winner of the best actress category, Emma Stone for "La La Land" - Beatty nervously took a long pause and glanced at Dunaway, who misread her co-presenter's confusion. Beatty handed the envelope to Dunaway, who announced "La La Land!"

Trump has not been a fan of the Oscars, at least in the last few years that he'd aggressively tweeted about the ceremony.

"The Oscar broadcast is really boring - where is the glamour and beauty?" he tweeted in 2013.

He called last year's ceremony a "sad joke, very much like our President." He compared 2014's ceremony to the disastrous rollout of the Obamacare website.

He even brought up the idea hosting it himself "just to shake things up."

'Gary from Chicago' goes from prison to live at the Oscars

'Gary from Chicago' due some local sports swag