Of all the things we expected from the Oscars this year, making us feel better was not one of them.The last few major awards shows, after all, were not only about handing out trophies but a chance for honorees and presenters to voice their white-hot anger... 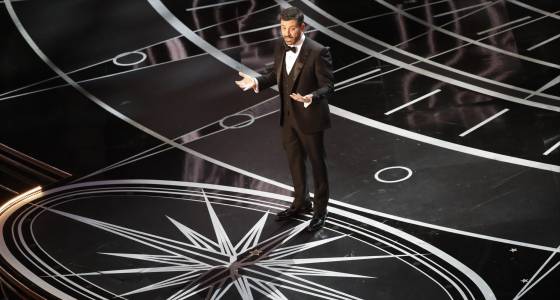 Of all the things we expected from the Oscars this year, making us feel better was not one of them.

The last few major awards shows, after all, were not only about handing out trophies but a chance for honorees and presenters to voice their white-hot anger toward President Trump’s executive travel ban, Mexican wall and a divisive America they no longer recognized.

Sunday, however, the academy appeared to take a step back, and counterbalance the political tension of the past few months by refocusing on what Hollywood does best — entertain.

Some of the levity was delivered via intentional stunts, such as candy and snacks dropping out of the ceiling attached to parachutes, while other moments — presenters Warren Beatty and Faye Dunaway naming “La La Land” the winner for best picture when it was in fact “Moonlight” — was not.

In one of the top moments of the evening before the show’s surprise ending, host Jimmy Kimmel ushered a group of stunned tourists who’d just disembarked from a Starline bus on Hollywood Boulevard into the Dolby Theatre mid-ceremony. Dressed in cargo shorts, baseball hats and carrying selfie sticks, they were introduced to gown- and tux-clad luminaries such as Nicole Kidman, Denzel Washington and Meryl Streep.

“Who’s your favorite actor?” Kimmel asked one of the dazed tourists.

“That man right there,” said the woman, pointing at Washington. The “Fences” star got up and hugged her before performing a mock wedding ceremony for her and her fiancé.

For the stars being honored, it was a reminder that much of America is still drawn to their celebrity, regardless of the political storm outside the theater.

That’s not to say there wasn’t an edge to the proceedings. “I feel like you’re ignoring the white celebrities,” said Kimmel to Edmund, Shelly, Pete and all the other tourists he was now on a first-name basis with. Kimmel was riffing on the criticism the Oscars have gotten over the last few years for a lack of diversity.

There were plenty more comments about America post Nov. 8, but the tone was less charged than that at the Screen Actors Guild Awards and the Golden Globes last month, when honorees such as Streep angrily ripped into Trump and his policies.

Gael Garcia Bernal called for respect of Mexican immigrants and the rejection of a border wall. A speech about international unity was read for foreign language film winner Asghar Farhadi, who boycotted the Oscars because of the travel ban imposed on Muslim-majority countries, including his native Iran. Engineer Anousheh Ansari, the first Iranian to go into space, accepted the award on Farhadi’s behalf. Presenter Mark Rylance (“Bridge of Spies”) commented about the importance of opposition and how women seem to be better at opposing without hate.

“I want to say thank you to President Trump,” said Kimmel in his opening monologue. “I mean, remember last year when it seemed like the Oscars were racist? It has been an amazing year for movies. Black people saved NASA and white people saved jazz. That’s what you call progress.”

He added: “As you know, I don’t have to tell anybody, the country is divided right now. I’ve been getting a lot of advice. It’s time to bring people together. You have to say something. Let’s just get something straight off the top. I can’t do that. There’s only one ‘Braveheart’ in the room, and he’s not going to unite us either. Mel [Gibson], you look great. I think the Scientology is working. I really do.”

After playwright Tarell Alvin McCraney won the Oscar with director Barry Jenkins for the “Moonlight” screenplay and made a speech about accepting the transgender community, Kimmel quipped: “And remember, just because a screenplay is adapted, it doesn’t mean we love it any less.”

Interestingly, Trump was rarely mentioned by name unless it was by Kimmel himself, who joked that he was worried about the president because he hadn’t tweeted about the late night host’s performance during the ceremony thus far.

Hollywood wasn’t checked out, it just needed a breather, and perhaps a bit of levity. Besides, many of the films being honored — “Hidden Figures,” “Fences,” “Moonlight,” “Lion” — addressed the very issues on the forefront of the national discussion: race, gender identity and fear of The Other.

A celebratory tone was set early on with the opening number, an upbeat musical performance of “Can’t Stop the Feeling” by Justin Timberlake.

An Oscar version of “Jimmy Kimmel Live’s” mean tweets was read by the stars. Emma Stone read a tweet: “Emma Stone looks like a crack whore in every role she plays.” Then Ryan Gosling: “Oh look at me I’m Ryan Gosling and perfect cheekbones. Go ... yourself Ryan Gosling.”

But it was the spectacular closer, when Dunaway announced the wrong best picture winner, that made an entertaining ceremony unforgettable. The entire “La La Land” cast was onstage when someone finally read the right card and realized it that in fact “Moonlight” had won.

It almost seemed like another Kimmel prank, like the ones he’d pulled earlier in the evening on Matt Damon. But no, it was the real deal, a moment so dramatic it of course had to happen during Hollywood’s biggest night.

“I wasn’t trying to be funny,” said Beatty.

Barry Jenkins, writer and director of "Moonlight," at the 2017 Academy Awards ceremony.

Barry Jenkins, writer and director of "Moonlight," at the 2017 Academy Awards ceremony.