Désolés, Montreal.The 416 has overtaken the 514 for the first time at the top of Canada’s 100 Best, the third annual list of the country’s finest dining establishments as chosen by a panel of 82 industry experts.Toronto’s Alo,... 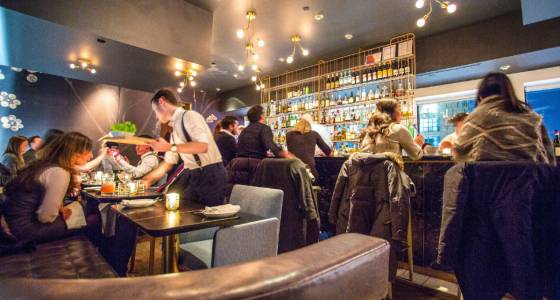 The 416 has overtaken the 514 for the first time at the top of Canada’s 100 Best, the third annual list of the country’s finest dining establishments as chosen by a panel of 82 industry experts.

“That is total domination of fine dining,” said Jacob Richler, the magazine’s editor.

Alo, which received a 4-star review from the Star’s Amy Pataki in 2015, debuted on the list as Canada’s best new eatery last year.

“The finesse and discipline of that kitchen he runs — it’s genuinely extraordinary,” said Richler of Patrick Kriss’s restaurant located on a third floor above Chinatown on Spadina Ave. Its location is part of its unique charm, Richler said. “You leave an unassuming street and suddenly you’re in this elegant little oasis the moment you emerge out of the elevator shaft. It feels cool and groovy and you’re happy to be a part of it.”

Toronto and Montreal made up half of the Best 100 entirely, Montreal with 26 spots and Toronto with 24, eight of the top 10 spots between the two.

If Toronto’s domination of Canada’s dining scene has evolved in one way it’s in that the city has caught up to Montreal in its offerings of more “approachable” and “unassuming” dining, Richler said. Montreal has had that “down to a T” for years with its bistros and “cozy neighbourhood restaurants.” Toronto is there now, Richler said, noting the simple charms of Dandylion and Edulis.

“You can find great food in far more varied sorts of places. And the list reflects that,” Richler said.

Ten smaller cities and towns cracked the list with one raved-about spot each, including Langdon Hall (15) in Cambridge, Ont., which jumped back into the top 20. Former Scaramouche chef Michael Stadtländer’s Eigensinn Farm (77) in Singhampton, Ont., which presented the chef’s pine-focused PineSpiel Project, returned to the list. And other small community restaurants earned spots like La Cabane PdC (22) in St-Benoît-de-Mirabel and Wolf in the Fog (41) in Tofino, B.C., which made the list for the third time.

“It’s always nice to see the small towns do well, because mathematically life is stacked against them,” said Richler. It’s difficult for the panel of judges to get to every notable restaurant around the country. This year’s list showcases the restaurants of 18 different cities and towns.

The 82-member panel of industry and dining experts has a changeover of about 25 per cent each year, which keeps the list fresh. This year’s 100 Best features 30 new restaurants, among the new additions are Toronto’s Chabrol (53), Planta (63), Peoples Eatery (71), Jacob’s & Co. (76), Shoushin (85), Ruby Watchco (95), and Leña (58), the new Latin-American spot which also won Best Restaurant Design award for its interiors by The Design Agency.