The duo will release "Love For Sale" in October 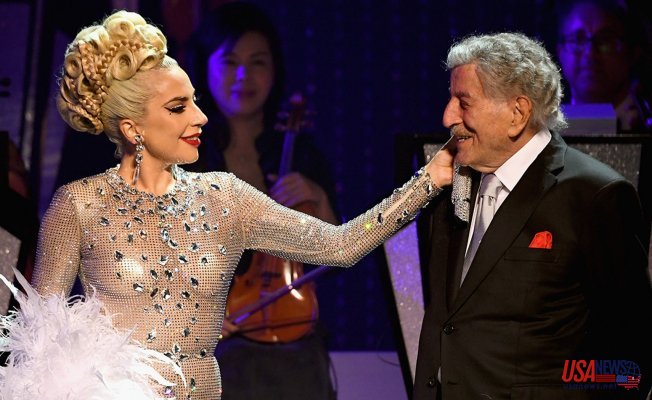 Bennett's last recording will be released on Oct. 1.

MTV will premiere the video for "I Get A Kick Out Of You" Friday, at noon ET.

The Porter tribute album will include solo songs by Bennett and Gaga. A tracklist for the digital/CD/vinyl edition (included below), doesn't indicate which tracks are which. The album cover graphic features a photo Bennett holding up a sketch by Gaga. Bennett is well-known for his visual art throughout the years.

Bennett will be making his final New York City live appearances tonight and on Thursday with Radio City.

Bennett's family disclosed in February that Bennett had been diagnosed with Alzheimer’s five years earlier, even though Bennett had continued to tour up until the lockdowns began early 2021.

For Bennett's 95th, a number of major celebrities are posting birthday tributes via the singer's Instagram channel or their own, including Paul McCartney, Bono with the Edge and others.

The tracklist for "Love for Sale",

9 - Only One of These Things

11 - I've got you under my skin (DELUXEVERSION)