At an Irish Pub in Tampa this Sunday, the small but slowly growing fraternity of Tampa Bay residents who have appeared on The Walking Dead will gather to watch the latest episode of the ultra-violent zombie series. 2 Weeks Ago3 Weeks Ago2 Weeks... 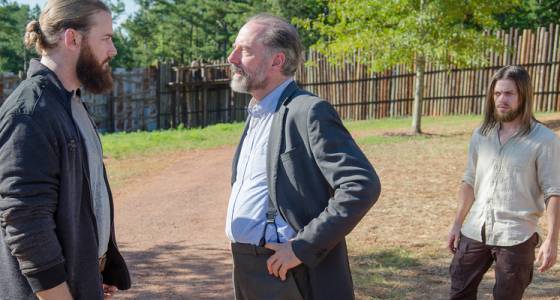 At an Irish Pub in Tampa this Sunday, the small but slowly growing fraternity of Tampa Bay residents who have appeared on The Walking Dead will gather to watch the latest episode of the ultra-violent zombie series.

You might not recognize them, or maybe you will, that all depends on how deep your fandom goes, but either way they will totally watch with you, and possibly even serve you a beer.

There's Justin Kucsulain, who played Ethan from Hilltop, or maybe you know him better as that guy who (spoiler alert?) got killed by Rick that time. He'll be bartending during the Walking Dead watch party at the new Paddywagon Irish Pub in Citrus Park on Sunday (and also every Tuesday and Friday, if you'd want to come by and take a picture with him, he said).

There's also Dahlia Legault, who has played Francine from Alexandria in eight episodes so far, and (spoiler alert??) has not been killed some gruesome way yet.

Then you've got Lance Tafelski, who played the "black bearded wolf" in an episode from Season 5 (got stabbed to death by Carol), and Owen Harn, who played "crazed filthy man" (shouted "we're the same, we're the same!" at Glenn after becoming, apparently, crazed), also in Season 5.

Kucsulain said he's invited several others who you might (or might not) know from the series to the party as well.

Everyone who attends the Walking Dead watch party this Sunday will be entered into a free raffle that will include prizes such as signed posters, restaurant gift cards and comic books, and there will be live music after the episode ends.

The episode will be played on the bar's 14 TVs, and the surround sound will be "cranked up really loud," Kucsulain said. The watch party (though not necessarily the raffle or the actor appearances) is set to be a weekly occurrence.

Cost: No cover, but you have to buy your own food and drinks