CaptionCloseAnd the red carpet goes to ... the women in red, for one, with equal accolades for shiny and shimmery gold worthy of the Oscars, this and all years.Long sleeves and belts played major roles Sunday in Los Angeles at the Dolby Theatre, along with... 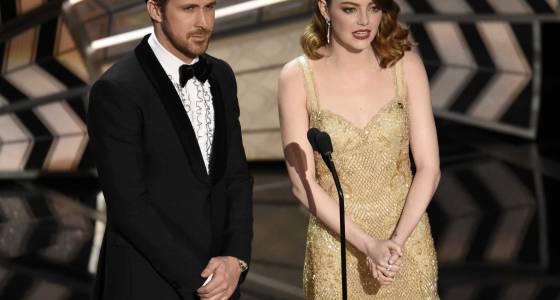 And the red carpet goes to ... the women in red, for one, with equal accolades for shiny and shimmery gold worthy of the Oscars, this and all years.

Long sleeves and belts played major roles Sunday in Los Angeles at the Dolby Theatre, along with a beautiful Janelle Monae, transformed in Elie Saab Haute Couture into a busy but fabulous fashion city of black tulle, birds, lace, feathers, sequins, crystal stones and a head piece that served as the perfect topper.

There were some midnight blues, including Meryl Streep's sparkly Elie Saab with trousers, and a smattering of blah black. Among the night's trends were velvet, worn Old Hollywood style by Henson, Brie Larson and Michelle Williams, and metallics, including a fierce Charlize Theron, Emma Stone and Jessica Biel.

All in all, the clunkers were few.

Viola Davis rocked the color as she picked up a best supporting actress Oscar for her role in "Fences." She wore silk Armani Prive in vermillion, with the perfect halter neck falling into a pleated capelet effect off the shoulders. Her short hair with bangs swept to one side let the dress shine and she kept jewelry to a minimum.

"It was a perfect shade of red on her," said Adam Glassman, creative director for O magazine and a special correspondent for Extra TV. "The color red was a symbol of hope and optimism. We are living in dark times, and perhaps by choosing red she is symbolizing HOPE. The gown was sensual and elegant at the same time. The draped capelet detail was so flattering on her. Her body looked amazing in it. It was stylish without trying too hard."

Ruth Negga wore her red Valentino Haute Couture by Pierpaolo Piccioli with a blue ACLU ribbon and Irene Neuwirth jewelry featuring Gemfields responsibly sourced Mozambican rubies. Her jewels included a head piece not all could pull off, but she did so effortlessly. The gown included a high lace collar and skimmed the ground, her makeup a perfect match on eyelids and lips.

"It proves you don't have to be plungy and show lots of excess flesh to look sexy and beautiful," said Avril Graham, the executive fashion and beauty editor for Harper's Bazaar U.S. "The fact that she wore those rubies played into that sustainable trend and were a great modern take."

Stone led the pack in a custom Givenchy Haute Couture by Riccardo Tisci. It was a long dress in all-over embroidered nude lace with fishnet detailing and gold and bronze crystals. It had tiers of fringe that lent a tad of flapper without going overboard. Her red lip color and swingy, matching earrings from Tiffany and Co. went a long way.

She was "finished with Old Hollywood worthy waves," said Kerry Pieri, the digital fashion and features director for Harper's Bazaar. "This was glamour at its best, finished with a subtle Planned Parenthood pin."

Dakota Johnson took one of the night's biggest risks. She wore a long-sleeve, strong-shouldered sweeping silk gown with a waist tie. The dress was Gucci and paired with a vintage Cartier necklace. "And it paid off," Pieri said.

Gold turned Champagne hewed on Nicole Kidman, in Armani Prive, and Felicity Jones, in princessy Dior Haute Couture. Amy Adams wore plunging metallic silver as a presenter, courtesy of Tom Ford. It was embroidered with silver bugle beads, had long sleeves and was cut wide open nearly to her waist.

Theron, Graham said, "knocked it out of the water, as always. The metallic moment was amazing."

Theron was "Grecian Goddess meets Glamazon" in her pleated Dior Haute Couture that plunged at the neck and was set free to flow below the waist, Glassman said. And that's not a bad thing.

"There was almost six yards too much fabric in that dress," he said. "It's impossible for her to look bad but that was an awful lot of dress and an awful lot of jewelry."

Jessica Biel was the definition of gold statuesque in a KaufmanFranco gown that hugged her body and included a metallic fringe-looking collar and liquidy train.

"She really scored well. It was cut really vavoom and close to show off her figure," Graham said. "This was not frothy. This was a way of wearing metallics and sequins and embellishment in a contemporary way."

"For me it's not about this being a fashion show. It's about celebrating the movies and who looks like a movie star. They should look like Lauren Bacall and Lana Turner and people like that," he said. "Emma looked the most like that. She looked sexy without being overt or redundant or trashy."

Hailee Steinfeld pulled one off. It was sheer white with back pleating and huge red and purple and blush floral embellishment. It had a heavy train and a dainty belt. It had a high collar. It was by Ralph & Russo, and it was one of those young-girl coups that might not have worked otherwise, not unlike Dakota Johnson's look.

Speaking of confections, but with a fierce bite, Monae made her usual fierce fashion statement in Elie Saab Haute Couture. Her Forevermark jewels were valued by the company at $1.5 million and included multiple diamond rings.

"It wasn't my favorite. I always like sleek lines," Graham said of Monae.

Kirsten Dunst looked a bit swallowed-up by her black Dior Haute Couture. She was strapless with a corseted bodice and asymmetric hem that fell at the ankle at the front with a voluminous train behind.

"It was big, black, wide, sort of 18th century," Graham said. "I just didn't like the proportions."

Henson, a co-star with Monae in "Hidden Figures," earned praise from many for her deep navy blue Alberta Ferretti. It fell off the shoulder and her Nirov Modi diamond necklace pointed the way to ample decolletage. Henson left her hair loose with a sexy side part.

"From head to toe she was sophisticated, elegant and glamorous," Glassman said. "The neckline was perfect for the Academy Awards. The navy velvet was so on point for the season and her hair was soft and cool. It was a modern take on the Old Hollywood look. Every detail worked on her."