The Oscar for best blooper reel goes to … the Oscars: Menon | Toronto Star

Just like the Leaning Tower of Pisa, New Coke, Little Big Horn, Jar Jar Binks, Bill Buckner, the Hindenburg, “Achy Breaky Heart” and man buns, the 89th Academy Awards will remembered for a mistake.Even with the explanations and apologies that... 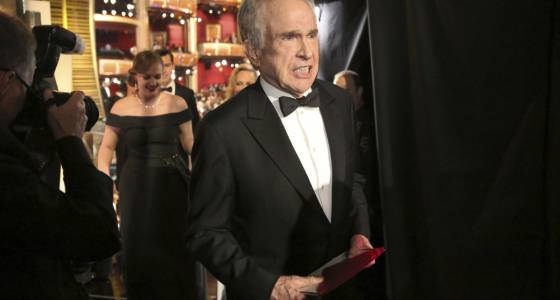 Even with the explanations and apologies that arrived on Monday, even after watching this bizarre gaffe more times than I’ve watched baby videos of my own kids, I am still confused.

Warren Beatty and Faye Dunaway are on stage to present the Oscar for Best Picture.

“And the Academy Award . . .” starts Beatty, reading from the opened red envelope . . .

He suddenly pauses, as if he’s about to have a stroke or is in the sudden presence of cryptograms. He reluctantly continues: “. . . for Best Picture.”

He turns to his right and looks offstage, as if hoping to see Jesus or someone who can provide emergency guidance. Dunaway laughs. She thinks Beatty is torquing the suspense. He is not. He is genuinely baffled.

He looks down at the card again in silence. His eyebrows shoot up, as if it now reads, “DO NOT SAY ANOTHER WORD, WARREN, OR WE WILL KILL YOUR PUPPY.”

He passes it to Dunaway with a look of muted horror.

She looks down and confidently bellows, “La La Land!”

Pause the tape right there.

We now know why Beatty was muddled. He was given the wrong envelope, the one for “Actress in a Leading Role,” which had just gone to La La Land’s Emma Stone. What we don’t know is why Dunaway would read a card that says, “Emma Stone, La La Land” and ignore the first part.

Isn’t this like revealing winning lottery numbers by only reciting the last three?

Here’s something else that does not make sense. After Dunaway mistakenly declares La La Land the winner over Moonlight, the announcer segues into an intro that, one assumes, would be prepared in advance: “La La Land has 14 Oscar nominations this year and is tied for the most nominated movie in Oscar history, winning seven Oscars: Production Design, Cinematography, Original Score, Song, Directing, Actress and Best Picture.” (Emphasis mine.)

Is the announcer winging it at the Oscars? Really?

A full minute has now passed as giddy La La Land cast and crew, basking in the euphoria, storm the stage. They hug one another, clutch their trophies and deliver acceptance speeches that are led by producer Jordan Horowitz.

By the time he finishes his speech, a second minute has passed.

We now know PricewaterhouseCoopers accountants, who flank both sides of the stage like the world’s least terrifying bouncers, were instantly aware of the error. There was panic and commotion. Many staffers backstage knew Moonlight was the real Best Picture winner.

They knew Beatty had the wrong envelope.

So why did it take more than two minutes for stagehands to come out and clear up the confusion? In fact, if Horowitz was not so gracious and swift on his feet — “There’s a mistake,” he said, before holding up the right winner card; “Moonlight, you guys won Best Picture” — the Oscars might still be unfolding right now as that bus full of surprised tourists leads the investigation.

It’s called the Academy of Motion Picture Arts and Sciences, right? It’s not called the Academy of Bush League Blunders. How do you make a mistake so monumental, it overshadows other crazy gaffes from Sunday night, such as the “In Memoriam” segment that included a photo of Australian producer Jan Chapman even though she is still alive?

So the Academy screwed up Best Picture.

And it killed someone.

Tune in next year when they forget to bring the statues.

This can’t happen, Academy. You need to fix something and fast. Maybe it’s time to stop with the archaic envelope reveals. We have the technology to beam winning names onto a screen. At the very least, maybe it’s time for the accountants to stop carrying two identical envelopes for each category.

No point in having two envelopes for each category if it only doubles the chance of giving out the wrong envelope for the most important category.

You know a gaffe has really drowned out the other storylines and damaged credibility when not even Donald Trump can be bothered to freak out on Twitter over the attacks on his name.

We are living in an age of conspiracies and lies and allegations of fake news. The truth is under fire. Too many people are saddled with too many irrational doubts. So, Academy, you really need to pull it together. Not just for your fancy ceremony, but for the sake of democracy!

If people can’t trust Best Picture, how are they supposed to trust the bigger picture?