The man who directed 'La La Land' is a 32-year-old wunderkind from N.J.

If all the glitzy awards season buzz pans out Sunday night in Los Angeles, a 32-year-old man from New Jersey will become the youngest best director winner in Oscar history.  Even if Damien Chazelle, who grew up in Princeton, doesn't take the coveted... 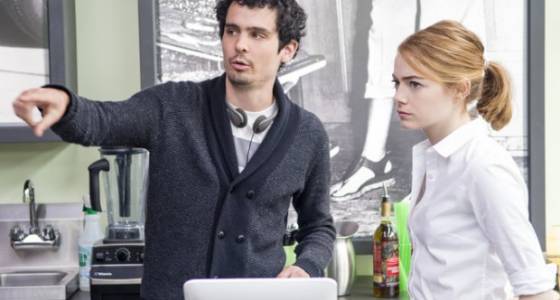 If all the glitzy awards season buzz pans out Sunday night in Los Angeles, a 32-year-old man from New Jersey will become the youngest best director winner in Oscar history.

Even if Damien Chazelle, who grew up in Princeton, doesn't take the coveted prize -- some say "Moonlight" director Barry Jenkins may triumph instead -- his modern-day movie musical "La La Land" has an good chance at bringing home plenty of gold. The movie's 14 nominations tie the record held by the 1950 film "All About Eve," a number last matched by "Titanic" in 1998.

Not bad at all for a guy who only has two other feature films under his belt. But drive is strong in the young director.

"Filmmaking's been on his mind for about 30 years," says his father, Bernard Chazelle.

"La La Land," which picked up a record-breaking seven Golden Globes in January, including awards for Chazelle's direction and screenplay, has managed another rare feat -- ultimate pop-culture saturation. A song-and-dance romance between Mia (Stone), an aspiring actress and writer who works in a cafe on a Warner Bros. lot, and Sebastian (Gosling), a jazz pianist who longs for his own club, the film, produced for $30 million and released in December, has grossed more than $135 million in the United States and $341 million worldwide.

It's hard to click around the internet without coming across dissections of the film's scenes, articles about how Chazelle's work has been inspired by old musicals or hot takes on backlash to the movie, including criticism of a white character positioning himself as a "savior" of jazz. A recent "Saturday Night Live" sketch saw actor-comedian Aziz Ansari play a man interrogated by police because he has reservations about the movie (Chazelle calls the bit "hilarious").

For a director who initially worried about how audiences would receive a throwback -- a musical conceived of and written for the big screen -- overexposure certainly hasn't been the worst outcome.

"It definitely seems to happen to every movie at a certain point," says Chazelle, whose first film was the 2009 indie "Guy and Madeline on a Park Bench," but who broke through with the intense drama "Whiplash" in 2014, scoring Oscar nominations for best picture, best adapted screenplay and a best supporting actor win for the commanding J.K. Simmons. (Simmons also has a small role in "La La Land.")

"I guess it's maybe par for the course," he says. "At the end of the day, you kind of just learn to be happy that people are talking about the movie, no matter what angle it's from."

Chazelle's rise from LA newcomer to bankable Hollywood A-lister seems to have been relatively swift -- barely seven years in the making. But back home in Mercer County, his family knows better.

For Damien, movies were always the dream, conjured by the Fred Astaire and Ginger Rogers movies his mother would rent, the used DVDs he'd find at Princeton Record Exchange, the discs he'd binge-watch from Princeton Public Library and the films he'd take in at the Garden Theatre on Nassau Street.

Both of Chazelle's parents, who have traveled to Los Angeles for Damien's latest Academy Award moment, are academics. Bernard, who originally hails from Paris, is a computer science professor at Princeton University and Damien's mother, Celia, is a professor of medieval history at The College of New Jersey and director of the college's Institute for Prison Teaching and Outreach. (Full disclosure: This reporter was once a student in her class.)

"He was absolutely taken," she says. By the time he was 3, he had informed his parents that he wanted to make movies. At 4, he was storyboarding. "He started writing stories even before he could actually write and drawing illustrations to them," she says.

At Princeton High School, Chazelle's experiences with the competitive jazz band formed the germ for what would become "Whiplash," the searing 2014 movie for which the director earned his first Oscar nomination (for the film's screenplay).

From New Jersey, Chazelle -- who also co-wrote the screenplay for the 2016 sci-fi thriller "10 Cloverfield Lane" -- enrolled at Harvard, where he became a student in the Department of Visual and Environmental Studies. His senior thesis would evolve into his first feature film, the Boston-set "Guy and Madeline on a Park Bench." Two years after he graduated, his work had its film festival premiere, followed by a small, well-received release in 2010.


Robb Moss, Chazelle's professor and advisor at Harvard, calls "La La Land" Chazelle's "$30 million version of his senior thesis." The black-and-white romance between Madeline and Guy, a jazz trumpeter, is a predecessor to his big-budget musical in theme and approach, if not scope. Bernard Chazelle, who has a role in his son's first film ("He cut a lot of my good stuff, actually"), said it was like a "trial balloon" for the big-budget picture.

Chazelle moved to Los Angeles a decade ago, hellbent on a career in the movies. "Whiplash" began its life -- and changed Chazelle's -- as a short that made waves at the Sundance Film Festival in 2013, winning a jury prize and grand jury prize. Chazelle was then able to generate enough financial backing to make the feature film starring Simmons as the taskmaster at a New York music conservatory and Miles Teller as his addled student -- a jazz drummer, like Damien. That feature-length version played at Sundance in 2014, where it won the grand jury prize and a $3 million distribution deal.

Bernard Chazelle, who introduced jazz to his son during car trips, remembers Damien being so shaken -- "terrified," even -- by the pressures of doing well in his high school jazz band that he couldn't eat breakfast or lunch. The same kind of obsession consumes Andrew, Miles Teller's character in the film.

"The entire story is told through the eyes of a teenager," he says. "So every anxiety is amplified, everything is embellished."


The Chazelles do claim some showbiz heritage. Celia Chazelle's father, John Martin, had small roles and her grandfather worked as a manager in the silent film era. Anna Chazelle, Damien's younger sister, is an actress with circus performer credentials who appears twice in "La La Land" -- once in the opening freeway number, hula-hooping atop a car, and again as assistant to a casting director.

Now working on a virtual reality short film, she followed her brother out to Los Angeles more than a year ago.

"I think we all that he knew that he had not only the passion and the talent but also this vast expanse of knowledge about the field that was just kind of unparalleled, in a way," says the 29-year-old. "For me, it's a great lesson. You just have to work so unbelievably hard in this industry."

In 2010, Damien married fellow Harvard alum Jasmine McGlade, a writer-director and former competitive fencer, after the two met at college. She had produced "Guy and Madeline," and though they divorced in 2014, is credited in the wide release of "La La Land" as an executive producer. His current girlfriend, Olivia Hamilton, has a small role in the film, as a customer at the cafe where Stone's character works.

Chazelle conceived of the musical before "Whiplash," but it would be years before "La La Land" drew enough financial support -- the original leads were Miles Teller and Emma Watson -- to start production, which became much easier with the success of the jazz drama. When the film finally opened a few weeks after the presidential election, some credited the portrait of young dreamers with providing a temporary reprieve from the tumult surrounding the country's political divide.

Yet the biggest inspiration for Chazelle, he says, was the "lost" feeling and culture shock he experienced moving to Los Angeles -- a mood Stone's character Mia inhabits, having come from a small town.

"It took me a while to wrap my mind around it," he says. "You find yourself very buffeted by the winds, the up and down of [the industry]," he says.

Chazelle will next leave choreographed flights of fancy behind for an actual moonshot. He'll again be directing Gosling, who is set to play Neil Armstrong in "First Man," adapted from the 2005 James Hansen book about the pioneering astronaut. As for whether he might be returning to New Jersey for inspiration in the future, well, there is this one project -- an untitled, Garden State-side musical that Chazelle wrote before "La La Land."

"I set it in Jersey, in Newark," says Chazelle. The story was about "the relationship between people in Newark and people in New York," he says. "Sort of the city-across-the-river thing." The visual cues of the unmade Brick City production, he says, were "high rises that you could see from a distance, both in Newark and New York."