CaptionCloseLOS ANGELES (AP) — The Latest on the 89th Academy Awards (all times local):3:45 p.m.First rule for Oscar bleachers fans: Yell loudly if you want to get a celebrity's attention.That's what a group of fans did — repeatedly —... 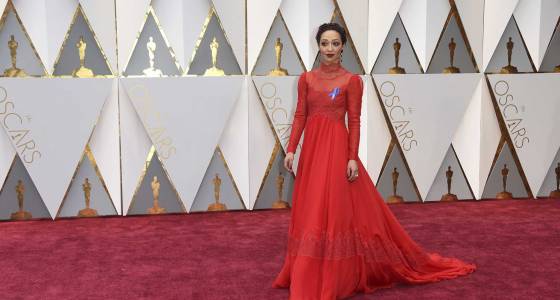 LOS ANGELES (AP) — The Latest on the 89th Academy Awards (all times local):

First rule for Oscar bleachers fans: Yell loudly if you want to get a celebrity's attention.

That's what a group of fans did — repeatedly — until Ruth Negga politely turned away from a red carpet TV interview to give them a wave.

Before she could, however, one of her earrings fell out. Fortunately her team saved it, she smiled and waved, then moved on.

After waving to the crowd, Lin-Manual Miranda made sure bleacher fans didn't overlook the person he was with. He pointed to her and mouthed the words, "My Mom."

Jackie Chan, beaming ear to ear, pretended to toss one of two stuffed pandas he was carrying into the crow. A disappointed groan moved through the bleachers when he moved on.

Jackie Chan has brought some furry friends to walk with him on the Oscars red carpet.

The action star did red carpet interviews clutching two plush panda toys. He told The Associated Press that he is a panda ambassador and also owns two of the bears in China.

The bears are dressed in yellow jackets and silver boots with UNICEF name tags, while Chan is sporting more traditional formal attire. Chan says he takes the bears with him everywhere, snapping photos with them. He says he may sell them for the charity.

Chan was a recipient of an honorary Oscar last year.

Celebrities have begun arriving on the red carpet in Hollywood ahead of the 89th Academy Awards.

Hundreds of people sitting in the fan bleachers shouted excitedly when actor Jerry O'Connell walked by.

Broadway star Cynthia Erivo is also among the first arrivals, her shock of white hair a beacon in the crowd.

The weather is slightly chilly and there's the possibility of sprinkles from gray clouds overhead.