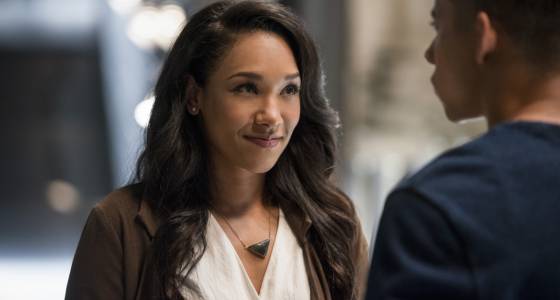 Although fans won’t see Iris (Candice Patton) perform a song and dance number in the highly anticipated “The Flash,” “Supergirl” musical, executive producer Aaron Helbing revealed to TVLine that Candice Patton’s character actually has a big role in the second installment of the two-night special event.

In February, Patton tweeted that she filmed “some fun stuff” for the musical. While the actress didn’t specify what those things were, she did reveal that the viewers will see Iris in a new light in “The Flash” episode of the crossover.

In an interview with Entertainment Tonight back in October, Patton noted that not all members of the cast have musical background, and that made them a little worried about the episode. “We’re all super excited but also a little bit nervous,” said the 28-year-old actress at the time. “We haven’t done anything like this — maybe Grant on ‘Glee’ — but that’s it.”

Despite the jitters, Patton said that she’s “excited” to be part of it. “This is the rare show where we get to do a lot of different things as actors, and this musical episode is an example of that,” she said.

As previously reported, the musical — which finds The Flash (Gustin) and Supergirl (Benoist) facing off against villain Music Meister (Darren Criss) — will kick off at the end of the March 20 episode of “Supergirl”  and will continue the following night on “The Flash,” where the bulk of the action takes place.

“Supergirl” airs every Monday at 8 p.m. on The CW, while “The Flash” airs every Tuesday in the same time slot.

Executive producer Aaron Helbing revealed that Iris (Candice Patton) will play a huge role in the much-awaited musical crossover between “The Flash” and “Supergirl.” Photo: The CW