Paul and Ringo might be otherwise engaged, but it seems like pretty much everybody else who's ever been associated with the Beatles will be at the Hyatt Regency Hotel in Jersey City this weekend for The Fest For Beatles Fans 2017. This will be the forty-third... 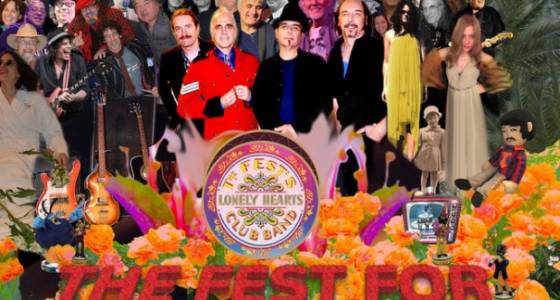 Paul and Ringo might be otherwise engaged, but it seems like pretty much everybody else who's ever been associated with the Beatles will be at the Hyatt Regency Hotel in Jersey City this weekend for The Fest For Beatles Fans 2017.

This will be the forty-third year that New Jersey resident and lifelong Beatles fan Mark Lapidos has organized this convention, and with the 50th anniversary of Sgt. Pepper's Lonely Hearts Club Band as its theme, this year's festival - which runs from March 3 through March 5 - looks to be one of the grandest ever, with a jam-packed schedule of live music, panel discussions, film screenings, and guest stars who rubbed shoulders with the Beatles.

"We have the 50th anniversary of the greatest and most famous rock 'n' roll record ever made," enthused Lapidos. "What could be more exciting than that? This is a world that most fans have never seen before. It's a reunion of Beatles fans and the people who knew and worked with the Beatles. It's like a Beatles Thanksgiving."

Ringo won't be there but organizer Mark Lapidos (l.) is still looking forward to the Fest For Beatles Fans on March 3-5.  This year's festival lineup presents 16 musicians who either recorded or performed with a Beatle or two, said Lapidos, including Beatles sideman Klaus Voormann, former members of Paul McCartney's Wings, and two musicians who played in John Lennon's Elephant's Memory Band at his 'One On One' concert at Madison Square Garden.

Other former Beatles side men and collaborators who will either be speaking or performing at the convention include George Harrison's sister, author Louise Harrison; Joey Molland of Badfinger (the first band signed to the Beatles' Apple Records;) Billy Kinsley of the Merseybeats (who shared bills with the Beatles at Liverpool's Cavern Club;) and Mark Hudson (Ringo's producer for over 10 years.)

The Hyatt Regency's ballrooms and conference rooms will play host to a dizzying array of concerts, contests and giveaways, photo and art exhibits, author signings, and a rare U.S. screening of "Looking For Lennon," a new documentary film that focuses on the traumatic events that shaped the young John Lennon's life.

The Fest's more interactive side will offer fans to compete in a Friday night dance party with "Sixties Dress-Up" and "Beatles Look-Alike" contests, a "Beatles Sound-Alike" contest on Saturday, and a Battle Of The Bands on Sunday. (Interested parties should visit the Fest's website to sign up in advance.) Triva and Name That Tune contests will take place each day, and a Beatles art contest will run all weekend, with winners announced on Sunday.

"One of the people speaking this year that I'm particular excited about is Leon Wildes, the attorney who pretty much single-handedly won John's immigration case in court," said Lapidos. "With all the headlines today about immigration, it's important to remember that Nixon and the government tried to have John Lennon deported for years." Wildes will speak about the Lennon case and how it affects immigration issues today.

Not surprisingly, Lapidos admits to being a Beatles fanatic from the moment he first heard the Fab Four as a boy. "I remember one time I went to a Sam Goody's record store to apply for a job, and when I got there, Abbey Road was sitting out on the counter, it had just come out that day," Lapidos recalled. "Well, the job could wait. I bought the record and went home and played it a hundred times. And the next day I came back and got the job."

Shortly thereafter, in 1973, Lapidos decided that somebody needed to commemorate the 10th anniversary of the Beatles' arrival in America and planned the world's first Beatles convention. The world must have been quite a different place back then; in short order, Lapidos - the manager of the Paramus Sam Goody's at the time - was able to get the blessing of both John Lennon and former Beatles promoter Sid Bernstein, and suddenly he was in the Beatles business.

"That was a life changing moment," Lapidos recalled. "John was in town for a March of Dimes benefit. I found out where he was staying and just went up to his hotel and knocked on the door. Harry Nilsson answered the door and I said I wanted to talk to John about a possible business relationship."

It was as easy as that, Lapidos said: "I told him my idea and John said, 'I love the idea, I'm a Beatles fan too.'"

A few days later, Lapidos bumped into Sid Bernstein (the legendary promoter who booked the Beatles at Shea Stadium) walking in Central Park. "I introduced myself and told him my idea and asked him to be a guest, and he said he'd love to," Lapidos said. "Murray The K was our first host, and Jim Kerr, who did the first Beatles radio show in America, was our announcer. And I was on my way."

That first Beatles convention made the covers of Rolling Stone in America and Melody Maker in Britain. Forty-three years and 127 conventions later, the idea of spending three days talking about the Beatles still makes Mark Lapidos giddy.

"Everybody I knew thought I was crazy," he said. "When I started this, the Beatles were suing each other and not speaking. The idea of them agreeing on something like a convention was insane. But it's like John said to me. They were Beatles fan too, the four of them. And you know what? It seems to have worked out."

The 2017 Fest For Beatles Fans will take place at the Hyatt Regency Hotel (2 Exchange Place, Jersey City) begins at 5 p.m. on Friday, March 3 and continues through 11 p.m. on Sunday, March 5. For ticket information, visit www.thefest.com.