STARCover: Ben Affleck has been seen in public with an attractive woman to whom he is not wed! Jennifer Garner is ready to put him in the stocks, as per Puritan tradition, even though, as it happens, this woman is a sober-living coach. He gave Goody Garner... 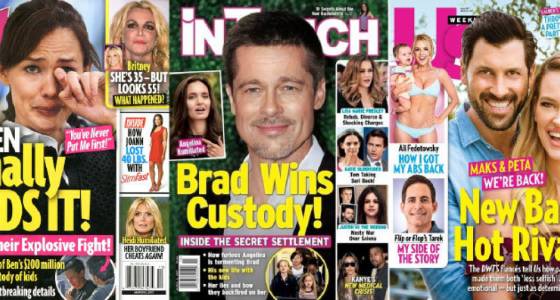 Cover: Ben Affleck has been seen in public with an attractive woman to whom he is not wed! Jennifer Garner is ready to put him in the stocks, as per Puritan tradition, even though, as it happens, this woman is a sober-living coach. He gave Goody Garner a $2.3-million diamond ring last November, but no amount of resources can turn a bad fit into a good one, as someone should have told him, and whoever cast him as Batman, a long time ago.

Speared: Britney Spears allowed an unflattering photo of herself to be taken this month, and that’s all Star needs for a “Brit-Brit: Exhausted or Insane?” piece. She’s balancing work and a 22-year-old model boyfriend… and there are good kinds of exhausted.

Expecting a guest: Now that she’s pregnant, George Clooney’s wife Amal wants her mother to move in. No word on where George will be living.

Cover: No room on the cover headline for one teensy extra word: “shared.” Yes, Brad Pitt will now have at least some access to his children. So she can’t just move Sax, Zax, Tax, Appomatox, Gobi and Gabbana to her child-extraction facility in Olduvai Gorge.

Man and Kidman: In Touch reminds us that Nicole Kidman revealed she was once engaged to Lenny Kravitz, which reminds that every time a guy’s penis accidentally pops out on stage, someone says “ah, the one that got away.”

Bachelor’s batch: In Touch tells us of Shinder, a dating app where the only dude is the app’s creator. He has had more than 100 matches in a brilliant bid to bring presentable, deeply dim ladies out of hiding.

Cover: Seven weeks after giving birth, Peta Murgatroyd wants her dancing body back before she returns to Dancing With the Stars next month. She talks a great deal about how excessively big her breasts are now, and there even be leaking so … if someone you love makes you watch this, Peta’s new look and the competitive efforts of Mr. T might be all you have to look forward to.

File under Flop, then: The guy from the Flip or Flop speaks to us about his split from his wife, her 911 call about him and the handgun in his backpack, and her dating a show contractor and him dating their nanny, and he somehow achieves his goal of making it all seem incredibly boring.