Following Warren Beatty and Faye Dunaway mistakenly presenting the cast and crew of “La La Land” with best picture instead of “Moonlight” at the 2017 Oscars, many people were quick to compare the actor’s mistake to Steve Harvey’s at the 2015 Miss... 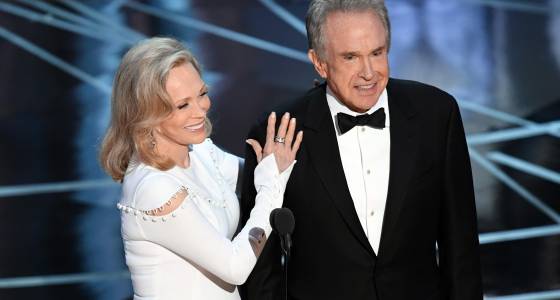 Following Warren Beatty and Faye Dunaway mistakenly presenting the cast and crew of “La La Land” with best picture instead of “Moonlight” at the 2017 Oscars, many people were quick to compare the actor’s mistake to Steve Harvey’s at the 2015 Miss Universe pageant.

Like Beatty, the “Family Feud” host had trouble announcing the winner of the pageant and ultimately revealed the wrong contestant. During his morning radio show on Monday, Harvey joked that he could instantly realize the mistake Beatty made by the look on his face.

“Warren Beatty had the same ‘oh hell nah’ look on his face,” Harvey joked. “Warren Beatty and me looked like Vicki and them when they got off the bus and found out they was at the Oscars,” the comedian continued, referring to tourists Vicki and Gary, who found themselves at the Academy Awards thanks to a Jimmy Kimmel prank.

Feeling Beatty’s pain, Harvey offered his help and revealed he knew how to get actor out of the mess. “I can get Warren through this. Call me, Warren Beatty. Me and Warren Beatty gonna take photos together.”

Although many were quick to blame “Bonnie and Clyde” star for the mistake, it actually wasn’t the legendary actor’s fault. According to a statement from PricewaterhouseCoopers, the accounting firm that is in charge of the Oscar ballots, “The presenters had mistakenly been given the wrong category envelope and when discovered, was immediately corrected.” The statement went on to read, “We are currently investigating how this could have happened, and deeply regret that this occurred.”

Beatty also clarified his mistake, telling the Oscar audience that he wasn’t joking. “I want to tell you what happened. I opened the envelope and it said Emma Stone, ‘La La Land.’ That’’s why I took such a long look at Faye and at you. I wasn’t trying to be funny.”