CaptionCloseLOS ANGELES (AP) — Kevin O'Connell finally has reason to celebrate at the Oscars.The sound re-recording engineer snapped an 0 for 20 skid on Sunday night, winning for sound mixing on "Hacksaw Ridge" with his 21st nomination.O'Connell... 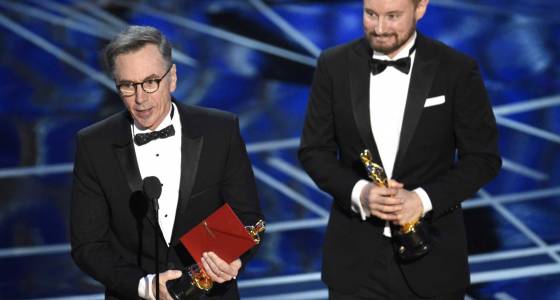 LOS ANGELES (AP) — Kevin O'Connell finally has reason to celebrate at the Oscars.

The sound re-recording engineer snapped an 0 for 20 skid on Sunday night, winning for sound mixing on "Hacksaw Ridge" with his 21st nomination.

O'Connell owned the record for most nominations without a win.

After waiting so long, a giddy O'Connell had the presence of mind to acknowledge his wife and two sons in the audience. He also thanked director Mel Gibson.

O'Connell mentioned his late mother, Skippy O'Connell, who gave him his first job in sound 39 years ago. He asked her how he could thank her. She told him to work hard, someday win an Oscar and thank her from the stage in front of the world.

He did just that.

"Mom, I know you're looking down on me tonight," O'Connell said. "So thank you."

He was previously nominated for such high-profile movies as "Top Gun," ''A Few Good Men," ''Twister," ''Spider-Man" and "Transformers."

O'Connell earned his first Oscar nod in 1983 for "Terms of Endearment." Until Sunday, the 59-year-old sound engineer from Long Island, New York, had not been in contention since 2007.

"I can't even tell you the experience that it was for me," O'Connell said backstage. "As much as I thought I knew what it was going to feel like, I didn't. It's the greatest feeling I've had in my entire life."