Galleries Videos CONTACT ADVERTISE
Girne 17°
broken clouds
BUSINESS EDUCATION ENTERTAINMENT HEALTH POLITICS SCIENCE SPORTS TECHNOLOGY
08:11 Stick it to “The Man” at the Zero Trust Security Summit
04:37 What to Consider When Starting Your Own Business
10:17 Clover POS System for Dental Offices
06:14 How Mobile Technology is Revolutionizing the World of Poker
20:31 The Importance of Banks in Our Lives
05:46 Things to Consider When Hiring a Criminal Defense Lawyer
09:15 Couple T-shirts are ideal for spicing up relationships
09:01 Laser Tattoo Removal and Its Amazing Benefits
07:58 Consolidate your medical bills with a debt consolidation
19:48 Is your mind a certain people? Elina Tanskanen gives a task, which you...
BIST
119703
GOLD
301.756
USD
5.9407
GPB
7.7323
EUR
6.5440
Breaking News
Why Go for Physical Therapy and How to Find the Best Therapist
Close

Of Human Bondage By Vern Thiessen, based on the novel by W. Somerset Maugham, directed by Albert Schultz. Until March 11 at the Young Centre for the Performing Arts, 50 Tank House Lane. Soulpepper.ca and 416-866-8666.This acclaimed adaptation of W. Somerset... 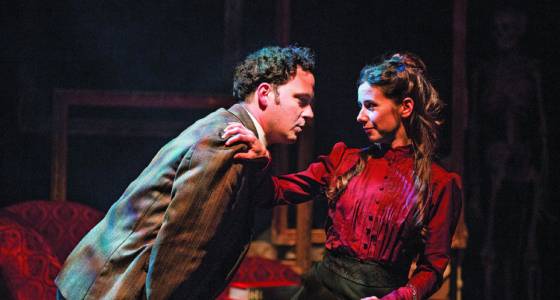 By Vern Thiessen, based on the novel by W. Somerset Maugham, directed by Albert Schultz. Until March 11 at the Young Centre for the Performing Arts, 50 Tank House Lane. Soulpepper.ca and 416-866-8666.

This acclaimed adaptation of W. Somerset Maugham’s novel returns briefly to Soulpepper in advance of travelling, with a number of other productions and concerts, to New York this summer for the Soulpepper on 42nd Street season.

If, halfway through its lengthy running time (over two and a half hours, including intermission) you find yourself wondering what messages about Canada a melodramatic English yarn about sexual obsession will send to our neighbours to the South — hang in there. The evening grows considerably richer as the story expands in scope in the second half, and the cumulative effects of Albert Schultz’s virtuosic staging and the cast’s excellent ensemble playing add up to something quite satisfying.

Maugham’s novel is an epic (over 700-page) autobiographical coming-of-age story about Philip Carey (Gregory Prest), an orphan with a club foot who struggles to find his métier and happiness. Adapting must be a harrowing, heartbreaking business — so many choices to make, so many darlings to kill: Vern Thiessen here skips over Philip’s early adventures and drops us straight into his time in a London medical school, having left an attempted life as a painter in Paris behind.

The first act focuses closely on the character’s tortured love affair with the tea-shop waitress Mildred (Michelle Monteith), who is uncultured and manipulative, abusing Philip financially and emotionally. This relationship and the representation of Philip as physically different have both been interpreted as Maugham’s channelling of his closeted homosexuality, but this potential reading is not played on here.

Rather, Mildred stands in for nothing more or less than a bad woman, in sharp contrast to the intelligent divorcée Norah (a deeply empathetic performance by Sarah Wilson) whose affections Philip can’t fully accept because Mildred keeps drawing him back in. Monteith impressively demonstrates her acting range in her portrayal of this self-destructive coquette, and Prest convinces as the searching, flawed hero, but because the focus is pulled in so tightly on their interactions, the first act comes across overall like a bodice-ripper.

An exceedingly well-staged bodice-ripper, it must be said. Schultz and his ace design team (sets and costumes by Lorenzo Savoini, costumes by Erika Connor, sound and music by Mike Ross) offer a metatheatrical conceit in which the 12-member acting company stands outside a central playing area and assist in creating the onstage world by playing instruments and creating sound effects. There are some very clever live montage effects, as when we see Philip buying a flower and Mildred accepting an identical flower elsewhere on the stage a half-second later.

A standup bass lit from within to expose its empty insides, and an anatomical skeleton both figure prominently onstage, echoing each other visually and pointing to Philip’s career dilemma — art or medicine? As the story grows richer in the second act, they also offer a visual metaphor for the show’s overall gesture, which is to gaze inside a life — Philip’s — and ask what really makes it full or empty, chaotic or ordered.

This happens after Philip finally (well, almost) unlinks from Mildred’s tractor beam; things get a lot worse for him before they get a lot better. Thiessen’s adaptation and Schultz’s staging consistently forge a clear narrative path even as the bravura acting company doubles and triples up on roles.

Vignettes by Oliver Dennis and Stuart Hughes as Philip’s bohemian artist friends accumulate into something thematically meaty and quite moving, and John Jarvis is a particularly bright spark as Philip’s patient-turned-benefactor Thorpe Athelney. It’s in Athelney’s household that Philip meets Sally (the luminous Courtney Ch’ng Lancaster), who’s not only devoted but politically liberated. Turning Philip and Sally’s union into a true love story may not follow the original, but allows Schultz, in the end, to deliver the feel-good factor that is a hallmark of much of his directing and producing.

Though Maugham’s novels and plays were wildly popular at the turn of the 20th century, they are much less known now, and infrequently taught. This engaging adaptation makes a strong case for a reappraisal.