Small-scale 'As One' a big event for Opera Colorado 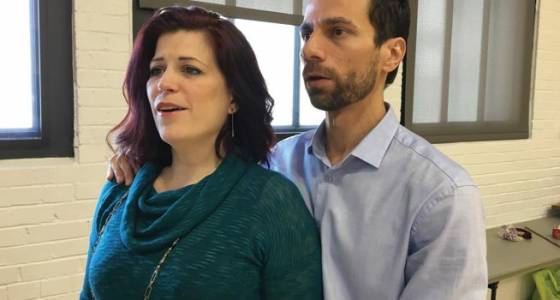 What: Opera Colorado presents "As One" by composer Laura Kaminsky and librettists Mark Campbell and Kimberly Reed, sung in English with English subtitles.

Even within the subgenre of "chamber opera," composer Laura Kaminsky's 2014 score "As One" is diminutive in scope. It lasts only 75 minutes with no intermission, and its "orchestra" is an onstage string quartet. There are film and projection elements, but the actual sets are sparse.

And there are only two singers — both portraying the same character. Even its librettist freely states that "As One" is "as much a theatrical song cycle as an opera."

Opera Colorado's presentation of the work next weekend, however, is not a small-scale event. It is already being called one of 2017's top cultural attractions in the Denver area. With "As One," the company gets back to a three-production season — previously it had two — and also ventures into an intimate style of opera requiring a more compact performance space than the Ellie Caulkins Opera House. And the production launches the troupe's "Scene Change" initiative, focusing on mobility and flexibility. The opera will be staged at the Pinnacle Performing Arts Complex in North Denver for three performances March 2-4.

Beyond these aspects, however, there is the fact that co-librettist (with Kimberly Reed) Mark Campbell is a major figure in today's opera world — one with close Colorado and Boulder ties, as he is a 1975 graduate from the University of Colorado's Department of Theatre and Dance. Best known for writing the libretto for the award-winning "Silent Night" by composer Kevin Puts, Campbell is in high demand. Still, he is a regular guest and mentor at CU NOW, the university's annual summer new opera program.

"As One" is one of the most performed new operas in the country, Campbell told the Camera. While its structure and concept are innovative, it is the subject that makes it truly timely — it is the story of its sole character's journey as a transgender person. The character Hannah is played by a baritone as "Hannah Before" and a mezzo-soprano as "Hanna After."

Campbell explained that Kaminsky had initially approached him with the idea of an opera about a transgender person, but it wasn't immediately clear what course that would take. Both consulted with transgender filmmaker Kimberly Reed for story ideas, but nothing seemed right.

"Then I asked Kim about some of her experiences and memories about being transgender," Campbell said. "She talked about a teenage memory of delivering a newspaper route in a blouse with a jacket over it. She described the feeling of freedom in that experience — and I knew there was a song there. It was a golden idea."

Reed's own experiences helped shape the character of Hannah, and she actually came on board as co-librettist. She also created a visual world for the opera in the form of film, and projections of her work will be used in the Opera Colorado production.

The opera is divided into three parts: early years, college life, and a final apotheosis as the character reaches a full knowledge of who she is supposed to be. The story is chronological, but the baritone and mezzo-soprano hand off emotional moments to each other in ways that might not be expected, Campbell explained. "I wanted the male to sing some lines that wouldn't be typically assigned to the male," he said, explaining that the two performers undergo a subtle merger, becoming "As One."

Baritone Kelly Markgraf and mezzo-soprano Blythe Gaissert have portrayed Hannah together before and will do so again with Opera Colorado. Campbell called them "great performers who work beautifully with each other."

The opera was first presented as a commission from American Opera Projects, and in the course of development, things like the string quartet accompaniment were established. Kaminsky's music is complex, so there is a conductor on stage with the quartet. For Opera Colorado, associate conductor Andres Cladera will handle those duties. Campbell said that the conductor also has some speaking roles and is in close contact with the two singers.

Stage director Jeffrey Buchman, who became aware of the work in its incarnation with AOP, is excited to tackle the intricacies of the presentation. "It's really amazing to stay focused on one character the entire time," Buchman said. "This is a real rarity in opera, and having two singers for different sides of that character adds unbelievable depth."

Buchman said that he wants to stay focused on the struggles and journey of the transgender person. "I want to normalize it, but I still want to keep the unique qualities of that journey. It has to be both universal and specific at the same time," Buchman said. "We all struggle with our identity throughout our lives, learning who we are. The transgender story is an example from which we can all learn about ourselves."

Buchman called Kaminsky's music "immediate, capturing all of Hannah's joy, frustration, anxiety and fear." He said that the opera "does not feel small in its wide variety of musical language."

Campbell stressed that rather than make any sort of political statement, he and Kaminsky wanted to tell a story. "It's time to rescue the transgender story," he explained. "Too often, the focus is on the 'tortured' narrative." He said that it was important to include humor in the story, to make the character human and even self-deprecating. The interactions with the conductor play into that.

"It's already an issue opera, and the audience already knows that," Campbell said. "After spending so much time with Kim and getting to know her, I know her as a real person, not just as a transgender person. A measure of success for our opera would be if it helps to make its own 'message' null and void."