Sign spinners' moves nab attention on street and at contest

CaptionCloseLAS VEGAS (AP) — You've seen them at intersections and outside strip malls spinning an arrow-shaped sign and trying to grab the attention of drivers and passers-by.Turns out, there's more to it than just twirling the sign, and the ones... 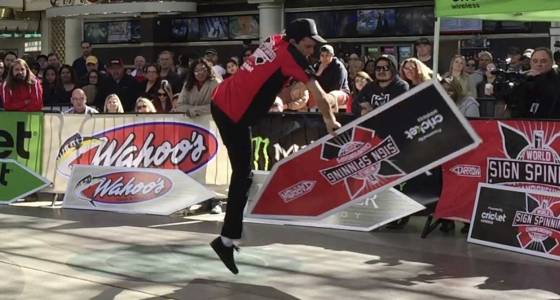 LAS VEGAS (AP) — You've seen them at intersections and outside strip malls spinning an arrow-shaped sign and trying to grab the attention of drivers and passers-by.

Turns out, there's more to it than just twirling the sign, and the ones with the most creative moves compete every year for the title of World Sign Spinning Champion.

More than 100 of the human billboards broke out their best moves for a crowd in downtown Las Vegas last week. In multiple heats with hip-hop and pop tunes blasting, the competitors twirled a 5-pound sign with one hand, on their head, while taking off a jacket and even while holding a handstand.

"I thought it was going to be temporary, maybe a few weeks," Clint Hartman, a sign spinner from Portland, Oregon, said of the job he has now held for 12 years. "My father always told me to get another job, but it turned into a career."

The competition's 10th edition was only open to employees of Los Angeles-based AArrow Inc., which requires its sign spinners to master 10 moves before they head to the streets. They also must be personable. For those skills, AArrow pays $10 to $20 an hour, depending on experience and city, while other sign spinners can earn less and see less steady work.

Hartman, 27, stands five to nine hours a day at major intersections. He also teaches moves to others at least once a week. He has advertised for apartment complexes, Verizon Wireless, Cricket Wireless and several other companies.

"When I say Clint, you say Hartman!" he repeated multiple times as he warmed up the crowd before his first performance Friday. Donning a cap, he rotated the sign for a bit over 30 seconds, finishing his routine by throwing the arrow into the air, sliding on his knees and catching the twirling sign with one hand.

His moves didn't nab the title, which went to Jose Angeles of San Francisco, along with $5,000 in prize money. Hartman finished in 15th place Saturday.

Most of the sign spinners are men between 16 and 30. AArrow employs spinners in 32 cities in the U.S. and nine countries.

The competition began around lunchtime Friday, in a bustling area of downtown Las Vegas. Sherry Steele was among the tourists who stopped to see a few of the routines during the competition's first round.

"It's interesting. It's a job that a lot of people probably don't pay too much attention to, but the fact that they take it so seriously and have made something out of it is pretty cool," said Steele, a Chicago resident.

Houston resident David Horn acknowledges that he was skeptical when he first heard about the sign-spinning job, but five years later, the 24-year-old is still working shifts at major intersections and loves it.

"Whenever I spin, it's not just a routine, it is an expression of how I feel," said Horn, who came in on 28th place. "It's also a great workout; every day is a full body workout. I stay in great, great shape."

Follow Regina Garcia Cano on Twitter at https://twitter.com/reginagarciakNO . More of her work can be found at https://www.apnews.com/search/ReginaGarciaCano .