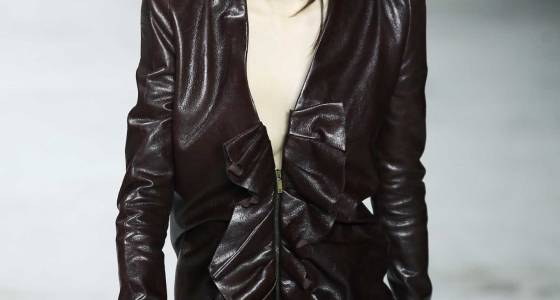 Fashion crowds do not usually brave a cold, elemental construction-site at night in Paris unless there's a very good reason.

And this was it: Anthony Vaccarello's highly-anticipated sophomore collection for the iconic house of Saint Laurent.

Here are some highlights from Tuesday, the first day of fall-winter 2017 shows.

The Saint Laurent show venue — a near-derelict site on the Left Bank that's undergoing construction and renovation — was a clear metaphor.

Vaccarello is continuing his creative reconstruction of the Parisian house since Hedi Slimane's departure.

As smoke — or was it dust? — wafted from the sides of the set scaffolding, the myriad looks began to file by.

They mixed the shimmering disco-dresses from the Slimane years with the peaked, tuxedo shoulders associated with the late house founder Yves Saint Laurent.

But beyond this, the exhaustive collection seemed less to do with Saint Laurent than Vaccarello himself like last season— in all his brazen, provocative glory.

While uber-mini dresses — the staple silhouette — teased the eye with knee-high-, and sometimes stripper-, boots.

Still, there were some nice creative twists, like a leg of mutton sleeve made literally out of mutton.

Elsewhere, there were some skillful abstract plays on leather ruffles — and the ruched boots will fly off the shelves.

Actress Gainsbourg, 45, who attended the Saint Laurent show in a black leather mini with tousled hair, spoke of her friendship with the French-Italian designer.

"I love what he does — he's a friend and I like to support him. I knew him before he started at Saint Laurent, so I was already wearing Anthony Vaccarello — his brand. And so to switch to Saint Laurent is chic," she told The Associated Press.

Model Herzigova, 43, who braved the elements in a revealing LBD that plunged to her midriff, also was effusive in praise for her friend for whom she has modelled in the past.

"Saint Laurent, it's audacious... (for) a woman sure of herself and sexy. That's why (Anthony) was chosen as it's a good match," she said, before running off.

One of the biggest names at New York Fashion Week switched allegiance this season — forgoing a runway show in February in her native land in favor of a trip to the City of Light.

There was good reason.

On Tuesday to kick off Paris Fashion Week, Vera Wang was presented France's top civilian award, the Chevalier of the Legion of Honor, for her services to the fashion industry by France's Ambassador to the United States, Gerard Araud.

The 67-year-old New York-born designer was celebrated at the official ceremony at a lunch at the Hotel des Invalides.

?"This is an unimaginable honor, both as an American and a designer, to be presented with this most prestigious award from the French Republic," Wang said.

Speaking of the award, Araud said that "French culture has been a strong inspiration throughout her life, and has influenced her work as both a designer and an accomplished and independent business woman."

The designer opted to present her fall-winter collection by means of a short online film — instead of a runway show — released Tuesday.

It could be called techno-couture.

The fashion-forward house of Tokyo designer Kunihiko Morinaga has built up a huge fan base in Japan for its intellectual designs and original use of techno-fabrics.

This was on full display Tuesday in a collection in which Morinaga explored eclectic, often-trapeze silhouettes in shimmering fabrics that encased the models' bodies in three-dimensions. Looks tiered and cascaded, a little like the figurative blue sea runway around which the models strutted.

Some looks even resembled a modernized version of the Duster Coats popular in that era, with high ruff-necks evoking the nostalgia of 1900s' styles.

A dusty palette of burnt sienna, blue, and umber — mixed with a splashing of black — produced a very pleasing display.

The art of the chic invite is still very much a staple of Paris fashion.

The little works of art often provide a hint as to what the collection has in store.

But so far, it was Saint Laurent's invite that was the chicest — a beautifully-constructed beige leather wallet with a gold panel with the house name embossed.

In other countries like in Brazil, fashion invites are often sent by plain-old email.

With the state of emergency extended across France following a spate of deadly extremist attacks, Paris Fashion Week has not escaped the tightening of security. Fashionistas have been advised to be extra vigilant.

Designer bags are frisked and searched at the entry point of each show — with armed guards and sniffer dogs often policing the famed venues including the Louvre and the Grand Palais.

Passports and official identification is also required in addition to the show invite, or else VIPs — however important — are refused access.

Thomas Adamson can be followed at Twitter.com/ThomasAdamson_K