Run the Jewels' NYC concert: An explosive session of protest and passion (PHOTOS) 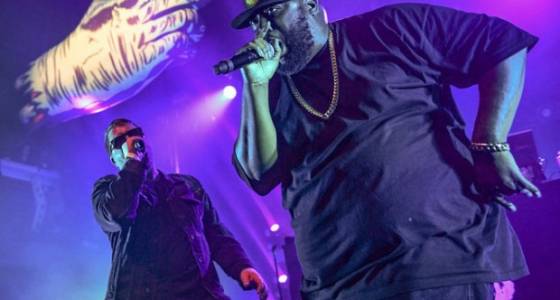 NEW YORK -- As the latest flares of pop-culture subversion engulf American music -- a trend set to define the decade's final years -- Run the Jewels is pooling gasoline and striking matches.

The inflammatory duo comprising hip-hop stalwarts "Killer Mike" Render and Jaime "El-P" Meline -- both 41 and as incensed as ever -- unleashed an exhilarating Christmas present to fans this winter, when the group's anticipated "Run The Jewels 3" album dropped Dec. 24, three weeks early.

Though it largely avoids explicit accusal of President Trump or other politicians -- name-calling is left to lesser emcees -- the album is a masterful revolt, loaded with challenges to the world in power, expressions of fear, anger, and ultimately, a unifying fist against what many view as an increasingly authoritarian government.

"How long before the hate that we hold leads us to another Holocaust?" Killer Mike wonders on the searing track "2100," a single spontaneously released the morning after Election Day.

"Run The Jewels 3" marks the first bulletproof rap record under Trump's reign, with A Tribe Called Quest's November destroyer "We Got It From Here ... Thank You 4 Your Service" marching in stride. It's easily the most affecting of RTJ's impressive three-album run so far, a project designed to out-blare the nonsensical "alternative facts" deluge.

If you couldn't score tickets to any of the group's four sold-out New York gigs this week, the first of which detonated at Terminal 5 Saturday night, rest assured -- or further lament your misfortune -- that Run the Jewels' live performance is a bombastic, near-replica of their studio work.

On stage in Manhattan, El-P and Killer Mike were at once playful and incendiary, cracking jokes and effortlessly trading verses, all of which igniting the room of 3,000. The duo and a DJ (no live band) plowed through most of "RTJ3" over 70 minutes.

Beneath their inflatable finger-pistol and fist (mirroring all RTJ album covers) the duo soaked through their matching black t-shirts and worked hard to keep pace with a set that, like "RTJ3," offers little room for vocal reprieve. The show uncaged the best of the album straightaway, with the throttling single "Talk To Me" and its line "Went to war with the Devil and Shaytan / He wore a bad toupee and a spray tan" setting the explosive, thumping tone.

The electro-earworm "Call Ticketron" came soon after, with a declaration of the duo as the last two rap "pirates" alive -- and enough bass to rattle the venue off its foundation and onto 12th Avenue. Here Killer Mike, the more naturally gifted rhymer of the pair, dropped his labyrinthian final verse with aplomb. The crowd danced and bopped wildly, intermittently chanting "RTJ!" with rally-like intensity.

A Brooklyn native, El-P mentioned several times how thrilled and humbled he was to be home, and laughed about how this show, fully electric and peppered with friends and family, was good enough to send the sun-glassed rapper into retirement, and a new career, perhaps in spoken-word poetry.

But the artist quickly turned solemn, and in the night's most pointedly political moment, he lambasted Trump -- using language we can't share here -- and wondered how he could even consider himself a real New Yorker.

But bemoaning the devolution of democracy has never been Run the Jewels' purpose, this night or elsewhere. The group endlessly calls for an alliance against oppression, and pleadings that such chaos and corruption must not continue. They make music as many do now, and will continue to do in coming years, with the hope that their voice unveils awareness, and that awareness can summon change.

As El-P concluded his assailing of the president and other pols, he was absolute: "They will not f***ing win."