Review: Chinese food that benefits from 'breath' of high heat 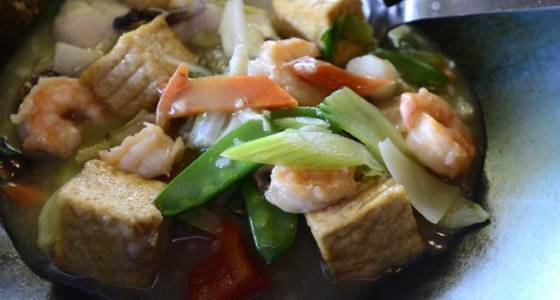 Noise level: Moderate, with the occasional roar of the breath of the wok, not to sound overly dramatic.

A longstanding tradition in my family dating back to the '70s was the Friday night dinner in Oakland's Chinatown. Typically, these repasts consisted of multi-course meals that would feed my whole family for about as much you would expect to pay for a single dinner at a downtown Boulder restaurant. Times and places change though, and it's impossible to fully replicate this experience around here, even if you adjust prices for inflation.

Recently a friend recommended that I check out the salt and pepper shrimp at Jin Chan Zhang, a Chinese eatery that's been around in one form or another for many years. Some may recall a previous location on 28th Street across from the Twenty Ninth Street mall. Nowadays, this restaurant occupies a more compact space a few blocks north, and the current management has held the reins only for the last two years or so.

After checking out this restaurant's menu, I suspected I could craft a dinner that came close to replicating bygone weekly feasts. Dropping in here on a Friday night with a friend, I was pleasantly surprised to hear many fellow diners speaking Chinese, always an auspicious sign. Counter service was fast and friendly, and the staff person was happy to answer our questions.

The menu here divides itself into the usual categories of appetizers, soups, noodle and fried rice plates, as well as Vietnamese pho and even a trio of Thai curries. Of course, there's also lunch and dinner entrees spotlighting various proteins, and accompanied by soup, rice and a choice of fried wontons or egg roll. These entree selections skew heavily towards such staples of Chinese-American cuisine as orange chicken and sesame beef.

But rather than focus on these options, we composed a meal focused on a special of crispy chicken leg and items from the traditional Chinese dishes menu heading. The aforementioned $5.99 poultry appendage was a simple preparation, and more generously portioned than its description would indicate. Closer in quantity to a quarter bird than a mere leg, this simple course consisted of four plump pieces of meat atop a bed of shredded cabbage. While the skin was the promised crispy and expertly seasoned with salt, the meat itself tended more towards the dry and chewy.

More successful was my friend's recommendation of the $13.95 salt and pepper shrimp plate, a pile of seafood sans heads but with shells on. Set off by a colorful garnish of peppers and scallions, this dish adroitly nailed the seasoning, with just enough vibrant pepper to complement the seafood's meatiness. Granted, the frying wasn't as crisp as that found on a batch of shrimp I picked up in Oakland's Chinatown over the holidays. But this Boulder spot's take still held appealing crunch and flavor worthy of a return visit.

There's a concept in Chinese cuisine, explained by Grace Young, called "wok hay" or "the breath of a wok," which is also the name of one of her cookbooks. In short, this term refers to the nuanced flavor that only extreme high heat wok cooking can impart. This quality is impossible to replicate with a wok on a relatively feeble electric range. Happily, Jin Chan Zhang makes the most of their powerful gas ranges to infuse their dishes with wok hay. While some might be alarmed by the quick bursts of flame emanating from the kitchen here, my friend and I predicted that such pyrotechnic displays would elevate the meal.

Our prediction came true when we took our first bites of the $11.95 seafood and tofu hot pot. My expectation was that this dish would arrive in a simple clay pot, but it came to the table in the wok in which it was prepared. Wok hay quickly became apparent, as white fish, shrimp and scallop arrived optimally tender but not overcooked. Tofu, fried until crisp and golden on the outside, was almost custard like on the inside. I haven't enjoyed more ideally crisp tender vegetables in recent memory than the colorful combination of carrot, snow peas, peppers and zucchini that benefited from judicious blasts of heat.

Similar accolades were earned by the $8.95 eggplant paired with a mildly spicy but still flavorful Sichuan sauce. This dish spotlighted eggplant chunks possessing a lightly charred but not off-puttingly burnt skin carrying caramelized sweet and smoky tones. The eggplant's interior was tender and an ideal accompaniment to the sauce's understated sweetness and more assertive garlic flavors, rounding out a compelling experience happily reminiscent of youthful Friday dinners.