Celebrating the 20th, or really 21st, anniversary of its popular sophomore record, “Turn the Radio Off,” Orange County ska-rock band Reel Big Fish delivered the goods Friday night at House of Blues Anaheim.The band made sure the final stop of... 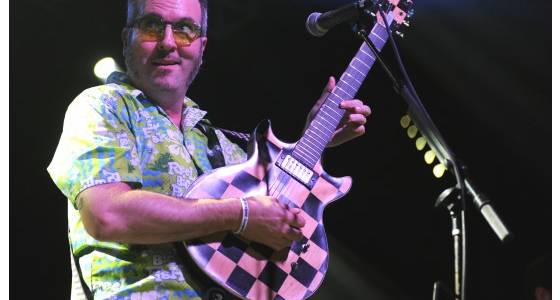 The band made sure the final stop of the anniversary tour was a hometown gig and hordes of rowdy fans were appreciative. With the Mad Caddies and Starpool setting the pace for a high-energy evening of entertainment it was evident that ska music is definitely still alive and well in Orange County.

As the lights went down and RBF players appeared on stage, cuing up the “Olé, Olé, Olé” chant, patrons pressed hard against the stage barrier, draping their newly purchased RBF T-shirts over it to keep them safe as the absolutely packed general admission floor swelled.

RBF didn’t dig right in with playing the album front to back, however, it did kick things off with a few other tracks including “I Want Your Girlfriend to Be My Girlfriend Too,” “Another F.U. Song” and “Your Guts (I Hate ‘Em).”

Three songs in and vocalist-guitarist Aaron Barrett made the official announcement that the record would be played in full, “Even the (bad) ones,” he added. The crowd exploded with cheers in response and as the lights lit up the fans on the floor, it was highly noticeable from front-of-house that a lot of the fresh faces beaming in the spotlight up against the barrier couldn’t possibly have even been alive when this album was released -- though certainly the angsty, juvenile, bratty, albeit silly-fun lyrical content of the record seemed right up their alley.

With that, the guys started in with “Sell Out” and the party was on. People began crowd surfing, skanking in larger, but really tight circles and one fan, who somehow managed to get into the venue with a shark costume, happily paraded around in the middle of the floor. The dancing and jumping from the fans on the floor vibrated throughout the entire venue, especially when they'd get into a rhythm and pogo in unison, literally rattling other portions of the expanded concert hall.

The first part of the album flew by, perhaps because these are all cuts that are still regularly incorporated into the band’s set lists including “Trendy,” “Join the Club,” “She Has a Girlfriend Now,” “Snoop Dog, Baby” and “Everything Sucks.” During “S.R.” the band showcased its musical chops, the horn section going crazy and chasing each other around the stage as the band members switched up parts of the song to do quick disco, punk, country and metal versions of it. After gut-growling through the metal portion, Barrett told the crowd “Yes, that does hurt my throat. Thanks for asking,” before pointing out original RBF bassist Matt Wong, who was watching from the balcony.

Joking that they had finally reached “side B,” RBF launched into the second half of the album which seemed to charge the already hyper floor-level fans. Going into “Skatanic,” “All I Want is More” and into the self deprecating and curse-filled, “Nothin’,” things just got more rowdy as one shirtless fan attempted to skull walk across the audience.

He didn’t get very far since these days patrons are typically holding up their cell phones to take photos and videos and they weren’t about to sacrifice a $600 smart phone to help support the weight of a fan attempting to walk the crowd.

After the band finished off with “Say ‘Ten,” “I’ll Never Be…,” “Alternative, Baby” and even the album hidden track, “Cool Ending,” fans were quick to point out that it had skipped one very popular song.

“We promised we’d play the whole album and I don’t want to let you down,” Barrett said. He then promised to play the most beloved, most popular RBF song ever and the band proceeded to play “The Impression That I Get” by the Mighty Mighty Bosstones.

“Just kidding,” he said afterward. “That’s not a Reel Big Fish song. That song is by the Squirrel Nut Zippers.”

They finally started to play their own popular song, “Beer,” which included a little of the Offspring’s “Self Esteem” in the middle.

The band ended the evening with a four song encore including “I’m Cool,” “Everyone Else is an (expletive),” “Where Have You Been” and its well-rehearsed and finely executed cover of a-ha’s “Take on Me.”


Our editors found this article on this site using Google and regenerated it for our readers.