“Can I wrap myself in this blanket, or is that tacky?” Viola Davis asked, pointing at a faux fur throw.“Girl, of course,” Alfre Woodard replied, encouraging Davis to break up the  just-so couch arrangement.At any other Oscar-week gathering it... 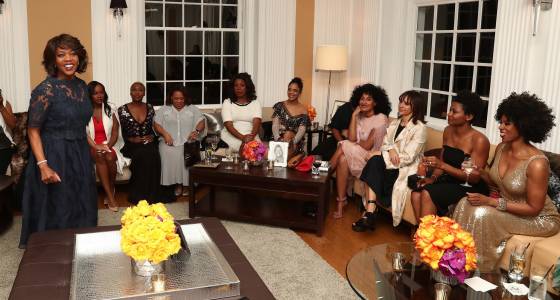 “Can I wrap myself in this blanket, or is that tacky?” Viola Davis asked, pointing at a faux fur throw.

At any other Oscar-week gathering it  might seem uncouth to  actually use the fancy blanket clearly intended more for decoration than warmth. But at the Sistahs Soiree —  the party Woodard has been hosting for eight years to honor women of color in the film business —  the vibe was far more relaxed.

Well, in some respects, anyway. The party took place in the extravagant Royal Suite at the Beverly Wilshire Hotel —  yes, the legendary “Pretty Woman” hotel. Standing by the big picture windows that looks out over Rodeo Drive, it was easy to feel like Julia Roberts  — even though the film wasn’t actually shot in the Royal Suite.

It was, however, Dorothy Chandler’s residence at one time, and on Wednesday evening the space had been adorned with vintage movie posters featuring African Americans —  Oscar Micheaux’s “Underworld,” Diana Ross in “Lady Sings the Blues.” Next to the pristine floral arrangements on nearly every table rested black-and-white photos of classic black Hollywood stars including Dorothy Dandridge, Beah Richards and Butterfly McQueen.

Though the room had been done-up, Woodard said she’d actually hoped this year’s celebration would be even more laid-back than usual. When she launched the Soiree, the actress’ main goal was to eliminate any sense of competition between women of color in the industry. She told each guest to arrive solo —  no publicists, spouses or friends. But she wasn’t sure how well everyone would get on.

“The first year, I thought: Is there gonna be a catfight?” Woodard admitted. “None of these women knew each other before we started doing this. The only time we heard each other’s names was when a rep or a fan was saying, ‘Oh, you know, I hope that B turns it down, because if she turns it down, you’ll have a shot at her role.’ It’s like, ‘no. That’s on y’all.’”

Now,” she added, “when we hear each other’s names, there’s a positive association —  like, ‘I can’t wait to see what she’s gonna do with that role’ instead of ‘oh, hell, I wanted that role.’”

This year, she eliminated a sit-down dinner, instead opting to have her guests, including Octavia Spencer, Rashida Jones and Tracee Ellis Ross, sit on those faux-fur-covered couches and kick their heels off.

And though a few journalists were roaming around the cocktail hour, Woodard promptly kicked us out at 8:30 so the group could engage in what she described as a candid, free-flowing discussion about race, gender, politics and career. And she meant it: She’d prepared a bowl filled with six topics that she planned for each of the 27 guests to address —  each answer timed to no more than three and a half minutes.

“This is a chance for us to share our stories —  to get it out,” explained Davis, who is up for best supporting actress at the Academy Awards on Sunday. “It’s very refreshing because for me, because I feel like as soon as I go anywhere, I do the best I can to keep everything in. I don’t know who to trust. I don’t know how it’s going to get out there. I don’t know how it’s going to be spun. Then you get to the point where you’re not confiding in anyone —  you’re not sharing or connecting. So yeah, it’s very important to me to connect.”

Rosario Dawson, who like Davis has been coming to the Soiree for many years, said the event marks one of the only times each year when she’s in a room where no one is looking at a cellphone. The actress  —  an outspoken Bernie Sanders supporter and Standing Rock protester — said she’d come prepared with political talking points.

“Caviar?” a server asked, interrupting her to offer an hors d'oeuvre.

“The timing of that could not have been more perfect,” Dawson said with a laugh. “Caviar. Standing Rock. Water protectors! But no, I’d like to bring that into the room —  what’s next? I try to find strength in the incredible wisdom and experience these women have.”

“It’s worth gold —  I mean, it’s worth money to hear all this stuff from all these divas that have been working forever,” said Loretta Devine, who’d made her way into the conversation. “Everybody is dying to be at this party. We just talk about the business and some of the stuff you’ve accomplished and the way you’ve done it. It’s just to encourage them to keep the faith. It’s a hard industry.”

As if on cue, Woodard began clapping, summoning the ladies to be quiet.

“We have had a lot of fun with our friends from the media. We friggin’ love the media!” she yelled. “But they’re gonna have to go, because we got business to attend to.”