Galleries Videos CONTACT ADVERTISE
Famagusta 16°
overcast clouds
BUSINESS EDUCATION ENTERTAINMENT HEALTH POLITICS SCIENCE SPORTS TECHNOLOGY
10:58 Kratom Tea: How Is It?
11:46 Office Furniture Products for you!
12:17 Top Clubs, Their Value, Revenue And Current Standings
11:14 Reasons Why Rewarding Yourself is a Good Practice
10:56 What Egypt Has to Offer for US Travelers
12:48 How to Maximize Compensation in Your Personal Injury Case
12:28 How To Use a CBD Vape Pen for Anxiety
05:28 Second-Hand Vaping Is Harmless
05:15 Guide to Vaping and CBD Flower for Beginners
14:55 COVID-19 Recovered Ronaldo and Zlatan outshining everyone in Serie A
BIST
1325
GOLD
460.114
USD
7.9493
GPB
10.5972
EUR
9.4663
Breaking News
Tips & Trick To Buying Jewelry Items Without Spending Much
Close

Significant departures from the standard repertory have been few and far between in Riccardo Muti's programming during the course of his Chicago Symphony Orchestra tenure. But when those departures have occurred, almost invariably each one has amounted to... 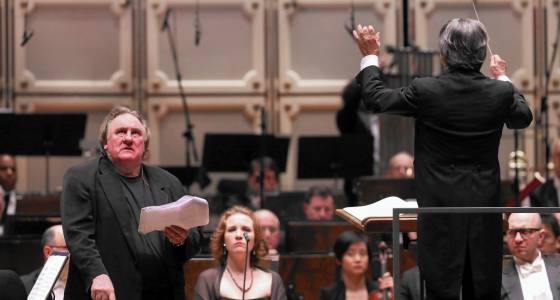 Significant departures from the standard repertory have been few and far between in Riccardo Muti's programming during the course of his Chicago Symphony Orchestra tenure. But when those departures have occurred, almost invariably each one has amounted to a red-letter, once-in-a-lifetime event.

Such is the case with the Muti-directed performances at Orchestra Hall this weekend of the oratorio compiled from the music Sergei Prokofiev composed for director Sergei Eisenstein's unfinished Soviet film "Ivan the Terrible" (1942-46).

This major project was high on his must-do list even before he led his first concerts as music director here in 2010. He has argued his fervent belief in the score's merits in performances around the world. Thursday night's concert marked the first CSO performance of Prokofiev's music for "Ivan the Terrible" in any form.

Any listener who responds to the tremendous energy and bold primary colors of Prokofiev's cantata "Alexander Nevsky" (that music also was drawn from a score to an Eisenstein film) is likely to be similarly moved by "Ivan the Terrible," especially in a reading as grippingly dramatic as the one presided over by Muti.

With the full Chicago Symphony Orchestra and Chorus, children's chorus, soloists and the great French actor Gerard Depardieu (portraying the fearsome Czar Ivan IV) all operating at full throttle under the maestro's command, the performance carried the audience along irresistibly with its neo-primitive power and drive.

In all, a classy way to climax the CSO's seasonlong celebration of Prokofiev's 125th anniversary.

The 90-minute oratorio Russian conductor Abram Stasevich assembled, nine years after Prokofiev's death in 1953, from portions of the score Eisenstein used in his two-part portrait of the ruthless medieval Russian ruler (also some portions he did not use) was the first of several attempts to present one of Prokofiev's last large-scale works in concert form.

Linking the diverse musical cues are chunks of narrated Russian text largely drawn from the film script by Stasevich and Vladimir Lugovskoy, who had collaborated with Prokofiev on the "Nevsky" cantata. The narration is interspersed with, and occasionally superimposed on, a good deal of varied, colorful and atmospheric music.

For these CSO premiere performances, which come with English supertitles, two narrators are employed. Yasen Peyankov, a member of the Steppenwolf Theatre ensemble, sets the scenes and describes the action, savoring each word of the text with idiomatic authority.

Even so, the central dramatic focus is on Ivan, played here with towering histrionic force by Depardieu, a longtime friend and collaborator of Muti's. The actor had learned the Russian text for Muti's performances at the Salzburg Festival in 2010. He summoned immense dramatic presence as the czar exhorted his followers to vanquish the treasonous boyars and other enemies of the state, in his zeal to unify the Russian empire under his supreme rule. Plenty of foreshadowings here of Ivan's eventual slide into madness.

Just when all that hectoring began to wear one down, Depardieu pulled back and brought out a more pathetic and touching side of the czar, notably for the scene in which Ivan, believing himself to be dying, desperately begged the unheeding boyars to honor his infant son as the legitimate heir to the throne.

The orchestra came through splendidly, not just in the big, noisy battle sections but in the quieter, more atmospheric portions as well: The musical portrait of the devoted czarina Anastasia and the murderous Efrosiniya was particularly effective.

But this is at heart a grand choral work, and, indeed, all but four of the 20 sections employ chorus. Director Duain Wolfe's exactingly prepared Chicago Symphony Chorus rose to its most impressive singing of the season. Although one missed the deep-piled sonority a Russian-speaking chorus would bring to this music, the 125 massed voices sang strongly and expressively, whether as bellicose warriors, rebellious boyars, rowdy peasants or pious congregants. The Chicago Children's Chorus made the most of its brief contribution.

Luxury casting brought the rich-toned Russian bass Mikhail Petrenko for the choral-orchestral song of Fyodor Basmanov and the Oprichniki. A pity the CSO management did not similarly engage a Russian contralto soloist. Sasha Cooke sang musically but her mezzo-soprano proved rather light for Efrosiniya's lullaby and she brought out none of the verbal nuance. Michael Brown did well with the cameo part of the Holy Fool.

The audience gave Muti and his cast of thousands an acclaim worthy of a little-known discovery that had just received royal attention. One audience member flung an armload of long-stemmed white roses on stage. It was a grand night for czars past and present.

'Ivan the Terrible' oratorio gets CSO premiere courtesy of Muti