For the first time, three architects have jointly won the Pritzker Architecture Prize, the field's highest honor. A relatively unknown team from Spain, two men and a woman, are the 2017 honorees, the prize's organizers announced Wednesday.Making their selection... 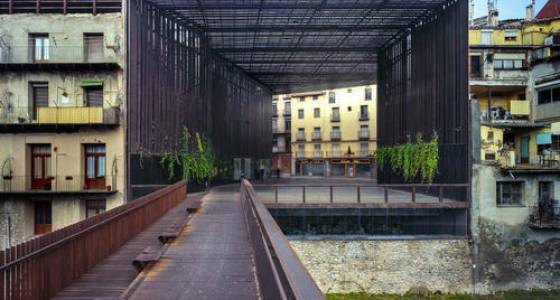 For the first time, three architects have jointly won the Pritzker Architecture Prize, the field's highest honor. A relatively unknown team from Spain, two men and a woman, are the 2017 honorees, the prize's organizers announced Wednesday.

Making their selection doubly unusual, the architects — Rafael Aranda, Carme Pigem and Ramon Vilalta — practice not in a glittering metropolitan center but in the small Catalonian city of Olot, some 70 miles northeast of Barcelona.

"The collaboration of these three architects produces uncompromising architecture of a poetic level, representing timeless work that reflects great respect for the past, while projecting clarity that is of the present and the future," said Australian architect Glenn Murcutt, the 2002 winner and this year's jury chair.

The award, sponsored by the billionaire Pritzker family of Chicago, is given annually to recognize "consistent and significant contributions to humanity and the built environment through the art of architecture." Awarded for a body work, it comes with $100,000, a bronze medallion and global prestige that often results in high-profile commissions.

Since the prize was first awarded in 1979, it twice has been conferred upon architectural partners: Switzerland's Jacques Herzog and Pierre de Meuron in 2001; and Japan's Kazuyo Sejima and Ryue Nishizawa in 2010. Two architects, Gordon Bunshaft of the U.S. and Oscar Niemeyer of Brazil, were given separate medals in 1988.

In addition to the novelty of recognizing three architects, this year's selection forms double-pronged response to the Pritzker's critics, who have claimed that the award perpetuates the myth of the lone "genius" architect and that it has not done enough to recognize women architects.

Pigem is the third woman to win, following Sejima and the late Zaha Hadid, who was honored in 2004. Emphasizing the close-knit collaboration of the Spanish architects, their shared work space is a library with a large table that fosters conversation among the three.

They have practiced in their hometown since 1988, lending their first-name initials to the name of their firm, RCR Arquitectes.

Aranda, Pigem and Vilalta are modernists who favor formal simplicity over the baroque forms of architects like Frank Gehry, the 1989 Pritzker winner. They often use recycled steel and plastic, melding those modern materials with historic buildings and the landscape. Most of their projects are in Spain and France.

One of their signature works, the 2007 Bell-Lloc winery in Palamos, Spain, is a partly underground structure, framed by leaning slats of rusting metal. Light and air penetrate gaps between the slats. Visitors descend past stainless steel wine vats to a cool, dark underground of wine cellars and a ritual-like wine-tasting room.

"In this project, the architects have deliberately chosen to cut the observer off from too exclusive a reliance upon sight," The Architectural Review wrote in 2010. "Their aim was to confront the visitor with the forces of nature, including the sense of gravity."

Other projects include an open-air theater and public space along a riverfront in Ripoll, Spain; an art and cuisine cultural center built into a 13th century French castle; and two works in Olot — an outdoor restaurant space sheltered by a lightweight curving roof and a running track nestled into woods.

Although the architects lack the high profile of Spain's best-known designer, the architect and engineer Santiago Calatrava, they are well known within the field, having won European architectural awards and honorary membership in the American Institute of Architects.

From their small dot on the architectural map, the eight-member Pritzker jury said in its citation, the architects have achieved something profound: A compelling response to the fear that globalization and global design trends will eradicate cherished local values, art and customs.

"They help us to see, in a most beautiful and poetic way, that the answer to the question is not 'either/or' and that we can, at least in architecture, aspire to have both; our roots firmly in place and our arms outstretched to the rest of the world," said the jury, whose members include previous winners like Murcutt, architectural educators, business leaders and U.S. Supreme Court Justice Stephen Breyer, who has a strong interest in the field.

The selection of the Spanish architects continues a Pritzker Prize drought for U.S. architects, who dominated the early years of the honor.

Since 1991, when Philadelphia architect Robert Venturi was awarded the prize, only one other U.S. architect — Thom Mayne of Los Angeles, the 2005 laureate — has won it. A Chicago architect has never been recognized.

This year, the prize will be presented in Tokyo on May 20.

Blair Kamin is a Tribune critic.

Obama's reaction to architects' first design for his library: 'He said it was too unflashy.'

New hope for South Works, but will plan live up to site's potential?