CaptionCloseNEW YORK (AP) — There's a new version of the frightful musical "Sweeney Todd" playing in downtown Manhattan that's undeniably meatier than most.Visitors to the Barrow Street Theatre planning to see the show about a homicidal barber whose... 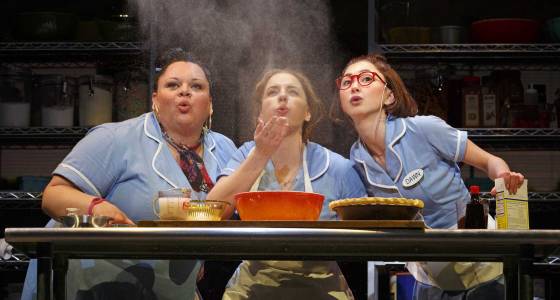 Visitors to the Barrow Street Theatre planning to see the show about a homicidal barber whose victims are ground up into pies are being offered the chance to munch on real meat pies before the curtain goes up.

"It adds something very fun, pre-show," says producer Rachel Edwards, who dreamed up the mash-up, which also happens to have real mashed potatoes. "It just gives people a different way in and a different way to experience something that they might not have thought of before."

The meat pies — created by a former White House executive pastry chef — are just part of a new wave of real food invading the world of theater, upping the realism as well as the immersive experience.

Pierogi are tossed to patrons at the Broadway musical "Natasha, Pierre and the Great Comet of 1812 " and real pizza slices are eaten onstage at "A Bronx Tale." Off-Broadway, the cast members of "Everybody " munch on veggie burgers, actors in "Man From Nebraska " nibble on french fries, ham and oatmeal, and a risotto is attempted at the play "Linda."

More pies — this time, sweet dessert ones — appear in the hit Broadway musical "Waitress ," where delicious odors waft through the theater thanks to a convection oven in the lobby. Pie consultant Stacy Donnelly creates some 15 real pies a week for the actors to use onstage and up to 1,600 mason jar pies are sold at a concession stand.

"We do feel that nowadays people are so consumed with technology and the creators really wanted to make sure people were immersed in the experience," said Donnelly. "Twitter can't give you a smell. It can't give you a feeling. It can't spark an emotion the way food can."

The use of real food on stages and in auditoriums adds a dash of genuineness to the stagecraft, though theater professionals counsel that it can't be forced. A few seasons ago, Hugh Jackman gutted and prepared a real raw fish with fennel and lemon onstage at "The River." It made sense — he was playing a fisherman.

That year, he was rivaled in culinary onstage skills by Carey Mulligan, who created a spaghetti Bolognese during the first act of the hyper-realistic revival of "Skylight" that left the whiff of sausage lingering deliciously during intermission.

Theater creators say audiences paying hundreds of dollars a ticket demand more nowadays. "People expect the realness of something. They don't want to see a rubber fish. They want you to go the extra mile," said Donnelly.

More recently, a real Thanksgiving dinner was prepared for the fictional family at the heart of "The Humans," although it consisted of a mass-produced turkey breast and instant potatoes. (The white wine was really just flat ginger ale.)

For the new Broadway hit "A Bronx Tale ," head prop person Mark Wasserman visits a deli near the Longacre Theatre before each performance and buys a ham sandwich, a slice of pepperoni pizza, a cannoli, breadsticks and iced tea (which stands-in for scotch onstage). "I don't even need to order anymore," he said, laughing. "They recognize my face and they prepare it."

His food props lend credibility to the story about a young man growing up in the mafia, especially seeing one actor munch on pizza. "It just adds to the character development that he's actually onstage eating," Wasserman said.

Wasserman has been part of the uptick in the recent use of real food props, including preparing a rabbit stew for "The Crucible" (really slices of banana in applesauce) and "Fish in the Dark," where a few real cookies and vegetables were mixed into a huge post-funeral buffet that was "99.9 percent artificial." For a touring production of "Elf," he made pasta with maple syrup for the actor playing Buddy ("which actually tasted pretty OK, to be honest with you.")

"I think it would be fair to say that any director or designer would love to have real food all over the place. It becomes a matter of cost. You might have a lot of fake food mixed in with real food to give the illusion that it's all real," he said.

Barry Weissler, the Tony-winning producer of "Waitress," said real food has a long history in the theater, citing shows by The Group Theater in the 1930s where meals were prepared onstage. He vividly recalled seeing David Cromer's staging of "Our Town" in 2009 that used sizzling bacon, an odor he says has stayed with him.

"I think if the work calls for cooking, we'll find a way to do it," Weissler said. "If we want to make reality, we need real props. If you're eating a piece of pie onstage and someone says, 'Mmm! This is delicious,' you'd better be eating it."

Edwards, founder and producer of the imaginative Tooting Arts Club in London, dreamed up the idea of setting "Sweeney Todd" in a real pie shop and persuaded the 32-seat historic store Harrington's to host it, giving the show a "pressure cooker, chamber of horrors atmosphere," she said.

Edwards transferred the show to the West End and now has faithfully recreated Harrington's at the Barrow Theatre, where strangers can break bread together on communal benches before the show. "I think it's a lovely way to begin a theater experience," she said. So far, about 75 percent of patrons are pre-ordering pies.

"I always thought that food could be more of a part of entertainment," said William Yosses, the chef. "It's been tried many times, often not so well because in a theatrical environment, you can't serve people in their seats. So this is the perfect way to do it. We're not talking about supper theater. We're talking about food as a character in your experience."

Mark Kennedy is at http://twitter.com/KennedyTwits