Oh, Oscar, even when you do something right it goes so wrong.4 Hours Ago3 Days Ago8 Hours AgoSunday night the Academy Awards weren't so white for a change, capped by the extraordinary selection of Moonlight as 2016's best picture.That would've been a stunning... 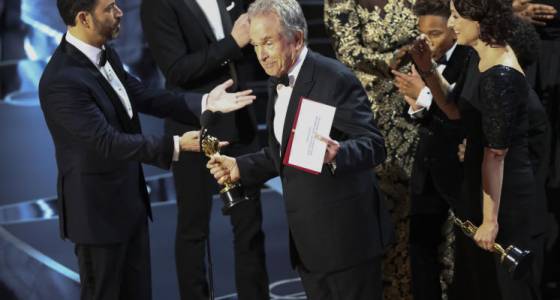 Oh, Oscar, even when you do something right it goes so wrong.

Sunday night the Academy Awards weren't so white for a change, capped by the extraordinary selection of Moonlight as 2016's best picture.

That would've been a stunning announcement even if Warren Beatty and Faye Dunaway correctly read the results.

This is what happens when you trust Bonnie and Clyde. Or perhaps blame lands on a stage manager handing out a wrong envelope. Maybe those tabulation accountants aren't as smart as they look.

The result is that a triumphant moment for Barry Jenkins' coming-of-self drama was overshadowed by the confusion surrounding it. More attention will be paid to Beatty and Dunaway's mistake than the film's provocative issues of African-American manhood.

Yet Moonlight deserves consideration as a movie the academy and Hollywood in general need right now. It's a bold statement of diversity for an industry finally getting acquainted with the idea. Moonlight insists that black lives, gay lives, addicted lives, all lives matter even in rough neighborhoods like Miami's Liberty City.

On an Oscar Night dotted with social and political statements, the academy left its strongest declaration for last.

Which makes it a shame that Dunaway enthusiastically declared La La Land as best picture, reading from a card Beatty handed her after opening a red envelope. Beatty appeared puzzled by the card, looked inside the envelope for another then to the wings, appearing to seek assistance.

According to the Los Angeles Times, a stage hand in the Dolby Theatre wings paced back and forth while repeating: "Oh my god, he got the wrong envelope," referring to Beatty who nonetheless gave the card to Dunaway to read.

Dunaway's error was pointed out on stage by La La Land producer Jordan Horowitz while acceptance speeches were in progress. Horowitz graciously announced Moonlight as the best picture winner, urging Jenkins and his colleagues on stage.

In an interview room backstage and later on television, Stone disputed Beatty's story, claiming to have kept her category's winner card, as tradition allows.

"My publicist is holding it backstage," Stone told an ABC reporter. "I'm not exactly sure what that story (from Beatty) was... I have no idea but I had my card the whole time."

Now we'll have Oscargate pursued when Moonlight should be the headline story. Another year, another unflattering hashtag: #OscarsSoEmbarrassed.

OSCARS NOT SO POLITICAL

Most of the major Oscar winners skipped political topics, two of them surprisingly so.

One of the most pointed statements came from Jenkins, accepting the adapted screenplay Oscar with co-writer Tarell Alvin McCraney.

"I tell my students that I teach sometimes, be in love with the process, not the results because a bajillion people are watching," Jenkins said. "And for all the people out there who feel like there's no mirror for you, that your life isn't reflected, the academy has your back, the ACLU has your back, we have your back.