The political fireworks expected at the 89th annual Academy Awards never erupted. But craziness did when “Moonlight” was named the best picture after “La La Land” had already been announced by Faye Dunaway and Warren Beatty.The... 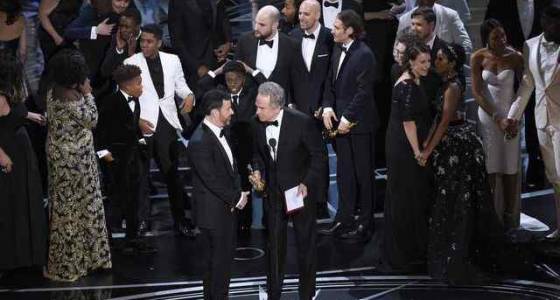 The political fireworks expected at the 89th annual Academy Awards never erupted. But craziness did when “Moonlight” was named the best picture after “La La Land” had already been announced by Faye Dunaway and Warren Beatty.

The “La La Land” producers were giving acceptance speeches when it became clear they hadn’t won. For a few moments, casts from both films wandered around the stage as everyone looked stunned. Beatty returned to the microphone to explain that he had been given the wrong envelope.

“I wasn’t trying to be funny,” Beatty explained, saying he had seen the name Emma Stone from “La La Land” when he opened his envelope.

Producer Jordan Horowitz then graciously passed his statue to the “Moonlight” producers.

“Even in my wildest dreams this could not be true,” said Barry Jenkins, the writer-director on “Moonlight” after accepting the award for best picture.

“I realize that a moment like this is a huge confluence of luck and opportunity,” said Stone, who thanked Chazelle and her co-star, Ryan Gosling.

Front-runner Casey Affleck was named best actor for “Manchester By the Sea.” The tearful actor said, “I’m only here because of other people” and paid tribute to Denzel Washington, whom many thought might win for “Fences.” He also thanked Matt Damon, who Affleck has known since he was 5 and who was a producer on the film, and director Kenneth Lonergan, who earlier won the best original screenplay award.

Almost lost in the 3-hour-and-50-minute ceremony is that the film industry is making strides in diversity.

Viola Davis finished her sweep of the award season, taking home her first Oscar after three nominations as best-supporting actress for her role in “Fences.”

An emotional Davis said she became an artist, “and thank God I did, because we are the only profession that celebrates what it means to live a life.”

Mahershala Ali, who plays a drug dealer with a heart in “Moonlight,” won his first Oscar as best actor in a supporting role. Ali was also part of the nominated “Hidden Figures.” Ali thanked his teachers and those on the film.

“Such a gift to be inspired by you,” he said.

Jenkins and Tarell Alvin McCraney won the best adapted screenplay award for “Moonlight,” the story of a black man growing up gay.

“For all those people who don’t think there is a mirror for you, that your lives are not reflected,” said Jenkins, who is African-American, “the Academy has your back, and for the next four years we will not leave you alone. We will not forget you.”

In 2015, the lack of diversity prompted the #OscarsSoWhite protest. Since then academy President Cheryl Boone Isaacs has added more people of color and women to the predominately white and male membership.

“La La Land” was the first musical with original music to be nominated as best picture since 1979 and had a record-tying 14 nominations.

Justin Hurwitz was a double winner for best score and best song, “City of Stars.”

Linus Sandgren, from Sweden, was named best cinematographer for the musical.

Justin Timberlake began the evening, which was broadcast on ABC, by dancing down the aisles of the Dolby Theatre in Hollywood singing his nominated song “Can’t Stop the Feeling” from “Trolls” and Bill Withers’ “Lovely Day.”

Timberlake then turned the show over to late-night talk show host Jimmy Kimmel, who called hosting the night a “no-win situation” because of the current political situation.

“The country is divided right now,” he said, before making a plea for people to talk to each other.

Most of his jokes stayed away from politics and focused on the movies, but not entirely.

“I want to say thank you to President Trump. Remember last year when it seemed like the Oscars were racist?” he joked, referring to the #OscarsSoWhite backlash of last year.

But politics weren’t totally out of the picture.

Gabriel Garcia Bernal, who is from Mexico, took time out while presenting the animated awards to say, “As a Mexican, as a Latin American, as a migrant worker and as a human being, I’m against any form of wall that wants to separate us.”

He received an ovation from the audience.

He then announced that Disney’s “Zootopia,” a clever, slyly funny movie about tolerance, diversity and talking animals, was the best animated film.

Iranian director Asghar Farhadi’s “The Salesman” won best foreign language film. The filmmaker, who had decided to boycott the awards after President Trump’s travel ban, had a spokeswoman read a statement, saying he did not attend out of respect for his country, Iran, and the six other nations targeted by the ban.

“O.J.: Made In America” was named best documentary. At 7 hours 47 minutes, it’s the longest winner ever. Its filmmaker, Ezra Edelman, dedicated the film to Ron Goldman and Nicole Brown, whom O.J. Simpson was accused of murdering, adding it was also for others — “the victims of police violence, police brutality and criminal injustice.”

The best short documentary winner was “The White Helmets,” about a humanitarian effort in Syria.

Kevin O’Connell finally won an Oscar on his 21st attempt — a record — for sound mixing for “Hacksaw Ridge.” The audience, who knew his story, warmly applauded him as he thanked his late mother, who got him his first job in the business. John Gilbert was also named best editor for the Mel Gibson film.

Colleen Atwood got her fourth Oscar for costume design for “Fantastic Beasts and Where to Find Them.”

Picking up the award for makeup and hairstyling for “Suicide Squad,” Alessandro Bertolazzi noted he was an Italian immigrant and dedicated his win “to all the immigrants.”

The Oscar-nominated “Arrival” picked up its only win in the sound editing category for Sylvain Bellemare.

“La La Land” won its first Oscar of the night nearly two hours into the show for the production design of David Wasco and Sandy Reynolds-Wasco before it went on to rack up its six wins.

Sara Bareilles sang Joni Mitchell’s “Both Sides Now” for the “In Memorium” segment. She was introduced by Jennifer Aniston who noted Bill Paxton, star of “Titanic” and CBS’ “Training Day,” had died at 61 on Saturday.