CaptionCloseLOS ANGELES (AP) — Academy Awards after parties are always swanky and star-studded. But this year, even disparate celebrations had a conversation topic in common: The best-picture gaffe that saw Warren Beatty and Faye Dunaway award the night's... 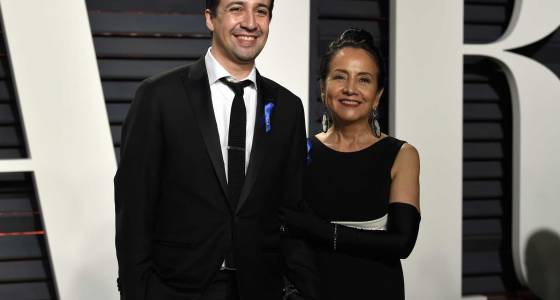 LOS ANGELES (AP) — Academy Awards after parties are always swanky and star-studded. But this year, even disparate celebrations had a conversation topic in common: The best-picture gaffe that saw Warren Beatty and Faye Dunaway award the night's top prize to "La La Land," only to correct themselves and present it to "Moonlight." The unprecedented error dominated post-party talk.

ELTON JOHN AIDS FOUNDATION VIEWING PARTY: The mix-up rocked the annual Elton John AIDS Foundation viewing party. There were a few cheers when "La La Land" was announced as the best picture winner, and then gasps and screams when the mistake unfolded on stage and "Moonlight" was revealed to have won.

"Wow. Thank (expletive) we didn't have Warren Beatty doing the auction," said Elton John to laughs after the telecast ended. But he added that his heart went out to the makers of "La La Land" for the painful error.

Laverne Cox, Sharon Stone and the cast of "Transparent" were among those urging attendees to the swanky affair to donate even more to the foundation, which has worked to help those dealing with AIDS and HIV for more than two decades.

John told guests that the foundation's mission had gotten harder with the new political landscape.

"People are at risk of losing their health care," said John.

"We're seeing a darker discourse on race," gay rights and more "happen before our eyes," he added.

An auction of items including a photograph of Carly Simon and other art helped the foundation raise more than $7 million during the evening.

The night's highlight was a raucous, soulful performance by the Alabama band St. Paul and Broken Bones. The band — joined by John himself for a spell — had the audience riveted.

GOVERNORS BALL: The first stop for many stars attending the Oscar show is the Governors Ball, a posh soiree held in the same complex as the ceremony, just upstairs from the Dolby Theatre. The ballroom was dressed in white and champagne colors, with vases of red roses dotted throughout.

The best picture gaffe delayed host Jimmy Kimmel's arrival, but the Oscar host was beaming when he finally arrived with pregnant wife Molly McNearney. Other show guests who made their way to the official after party included the cast of "Moonlight" and director Barry Jenkins, Viola Davis, Lucas Hedges, Vince Vaughn and Pharrell Williams.

Since most show guests had nothing to eat but candy dropped from the ceiling during the show, consuming calories is a top priority for many after the show. The Governors Ball is catered by Wolfgang Puck, a waiters passed out comfort food including macaroni and cheese, individual pot-pies and mini cheeseburger sliders. A dessert bar at the back of the room offered chocolate Oscars.

But everyone was welcome to take to the dance floor at the center of the room. Broadway star Cynthia Erivo performed, followed by a DJ spinning Prince and Michael Jackson.

VANITY FAIR PARTY: The big botch of best picture was of course the most popular topic of the night by far.

Faye Dunaway, the one who actually presented the misplaced award in the first place, stood at a table nursing a cocktail at the Vanity Fair party in Beverly Hills, chatting with various men as though nothing amiss had happened at all.

Seth Rogen stood with his crew outside recounting the play-by-play of the fiasco, Rogen's unmistakable laugh bubbling up throughout the tale.

Those connected with "Moonlight," including lead actor Trevante Jones and co-screenwriter Tarell Alvin McCraney, got a strange mix of congratulations and consolations as they walked the room, with admirers declaring their happiness at the victory and regret over the strange way it happened.

But the strange ending of the ceremony did little to dim the mood of the ridiculously star-studded party.

Partiers engaged in the annual ritual of ending their awards-season fast with In N Out burgers, which are passed around the party as though they were fancy Hors d'oeuvres.

Amazon.com CEO Jeff Bezos, whose monolithic company is now in the fine film business, appeared to enjoy his movie mogul role, holding court with several people around him.

Jesse Plemons and Kirsten Dunst, 'Fargo' co-stars who are now engaged, huddled together like they were the only people in the room.