Oscars 2017: They wore that? Photos and fashions from the red carpet 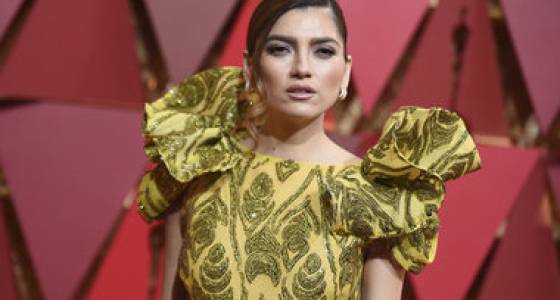 In other words, just another wide range of fashions on the Oscars red carpet at the annual awards show, held this year at the Dolby Theatre in Los Angeles.

There was plenty of ornate gold, including a fringed dress on Emma Stone that appeared part goddess, part flapper. It fit her perfectly.

Miranda brought his mother to the Oscars, and she also prominently displayed the ribbon. The ACLU is among the groups suing over a travel ban imposed by President Donald Trump's administration that has been placed on hold by federal courts.

Here's what those blue ribbons at the #Oscars are about. https://t.co/iUBXLIcKjK

Jackie Chan brought some furry friends to walk with him on the Oscars red carpet. The action star did red carpet interviews clutching two plush panda toys. He told The Associated Press that he is a panda ambassador and also owns two of the bears in China. The bears are dressed in yellow jackets and silver boots with UNICEF name tags, while Chan was sporting more traditional formal attire.

Each celebrity who strolled the Oscars red carpet seemed to have his or her own style as they pass their cheering fans in the bleachers. Some, like Stone and Jeff Bridges, smiled politely and wave while others just walked by, seemingly oblivious to the adulation.

Laura Dern and Kidman, meanwhile, joined hands and lifted them in a cheer of their own.

Negga accessorized with something extra on her first Oscar red carpet as a nominee -- a blue ribbon in support of the ACLU. She gave kudos to the civil rights group for helping the real "Loving" couple as they fought their way to legal marriage as a mixed-race couple. And she shouted out her home country, Ireland, poised in her red tiara and statement earrings.

On the couples front, Chrissy Teigen joked with hubby John Legend on the carpet dressed in white Zuhair Murad Couture with gold embroidery and a dramatic cape. Legend wore Gucci. Another favorite carpet couple, Jessica Biel and Justin Timberlake, chatted amiably -- he in a Tom Ford tux and she in a slinky KaufmanFranco textured gown with a statement gold-and-silver collar adornment that lent the appearance of metallic fringe.

THE LOOK: #ScarlettJohansson at the #Oscars: just one word: WOW. pic.twitter.com/GhhdzlEpW4

Disney's Sofia Carson is at the #Oscars red carpet and she looks stunning! pic.twitter.com/NmtVOFcWl2