Oscars 2017: 5 Most Cringeworthy Moments From The Academy Awards

The Oscars had some memorable moments, but they weren’t all good ones. Awards shows can be cringeworthy sometimes, and the 2017 Academy Awards were no exception. There were quite a few moments in Sunday’s show that had many viewers shaking their heads.... 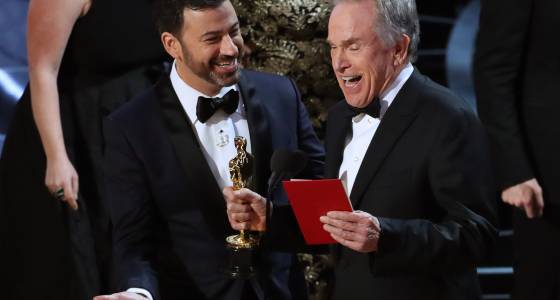 The Oscars had some memorable moments, but they weren’t all good ones. Awards shows can be cringeworthy sometimes, and the 2017 Academy Awards were no exception. There were quite a few moments in Sunday’s show that had many viewers shaking their heads. These were some of the worst.

In Memoriam Mix Up: Many people likely didn’t notice, but putting a living person in the In Memoriam segment is a pretty bad mistake. Producer Jan Chapman, best known for “The Piano,” saw her own photo in the reel when costume designer Janet Patterson was supposed to be honored. While the name was correct, the picture was not.

“I was devastated by the use of my image in place of my great friend and long-time collaborator Janet Patterson. I had urged her agency to check any photograph which might be used and understand that they were told that the Academy had it covered. Janet was a great beauty and four-time Oscar nominee and it is very disappointing that the error was not picked up,” Chapman told Variety. “I am alive and well and an active producer.”

Sunny’s Simba Lift: Host Jimmy Kimmel thought it would be cute to lift Sunny Pawar in the air while playing a song from “The Lion King.” The “Lion” star shouted for more candy to be dropped from the ceiling. It wasn’t that cute, and many Twitter users felt Kimmel was using Sunny as a prop. In a show that struggles to stick to time limits, this bit could’ve definitely been cut.

Parachuting Candy: The candy gag could’ve been killed as well. They were trying to recreate the magic of Ellen DeGeneres’ pizza moment, but the Academy knows that the sequel is never as good as the original. It was probably entertaining for the audience members in the auditorium, but it was not interesting to those at home.

Mocking Mahershala: Kimmel seemed to enjoy taking digs at Mahershala Ali’s name. We’re sure the best supporting actor winner has heard the jokes before, and while he seemed to take it in stride, it’s just a cheap shot.

The Best Picture Envelope: We can’t mention cringeworthy Oscars moments without mentioning the most-talked about one. Warren Beatty and Faye Dunaway were given the best actress envelope instead of the best picture one. They announced “La La Land” as the winner, but the creative team’s speech was interrupted to reveal that Beatty had the wrong card. “Moonlight” was the true best picture winner. The Oscars mix up stunned audiences everywhere.

Even host Jimmy Kimmel didn't know what to do when Warren Beatty announced the wrong winner at the 2017 Oscars on Feb. 26, 2017. Photo: Reuters