Oscar winners share statement from DP denied entry to US 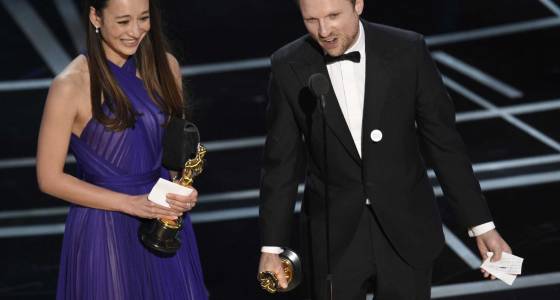 LOS ANGELES (AP) — Politics continued to pervade the Academy Awards Sunday as the 40-minute Netflix documentary "The White Helmets" took the best documentary short award. The category generally doesn't get much widespread attention at the annual awards show, but this year, the denial of entry into the U.S. for the film's 21-year-old Syrian cinematographer put "The White Helmets" in the broader spotlight.

Director Orlando von Einsiedel and producer Joanna Natasegara accepted the Oscar, but devoted most of their short time on stage to sharing a statement from the absent Khaled Khateeb.

"We're so grateful that this film has highlighted our work to the world," the statement, read by von Einsiedel, said.

He hoped to invite "anyone here who hears me to stop the bloodshed in Syria and around the world," that to "show that we all care that this war ends as quickly as possible.

The film focuses on the rescue workers who risk their lives to save Syrians affected by civil war. Many of the group's members have been killed by Syrian President Bashar Assad's air forces. The group also was nominated for last year's Nobel Peace Prize.

According to internal Trump administration correspondence seen by The Associated Press, the Department of Homeland Security decided at the last minute to block Khaled Khateeb from traveling to Los Angeles for the Oscars.

Khateeb was scheduled to arrive Saturday in Los Angeles on a Turkish Airlines flight departing from Istanbul. But his plans have been upended after U.S. officials reported finding "derogatory information" regarding Khateeb.