The brand new House of Blues at the Anaheim GardenWalk is primed and ready for its grand opening on Feb. 28 and March 1 with Orange County punk rock band Social Distortion on deck to help give it a loud and warm welcome."It is exciting and it is an honor... 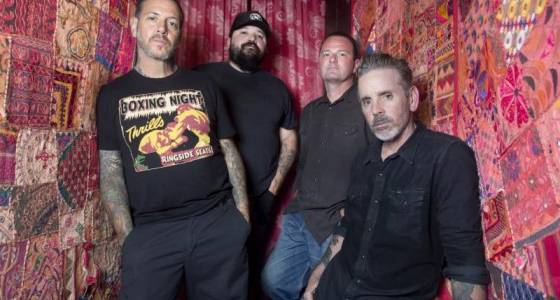 The brand new House of Blues at the Anaheim GardenWalk is primed and ready for its grand opening on Feb. 28 and March 1 with Orange County punk rock band Social Distortion on deck to help give it a loud and warm welcome.

"It is exciting and it is an honor to get to open up the House of Blues," Social Distortion frontman Mike Ness said in a recent interview. The band has a long history with House of Blues as it played numerous multi-night stints throughout the years at the old location in Anaheim and the former venue on Sunset Boulevard in West Hollywood. These two opening shows will be the band’s 85th and 86th sold-out House of Blues gigs.

"I’ve always really liked House of Blues even though it’s a (chain) corporation," Ness said. "If I have my choice, I buy my coffee from a mom and pop shop. I just don’t go to Starbucks unless it’s an emergency. But, if I do go to Starbucks, I know what I’m going to get.

"It’s consistent and it’s good and that’s what I like about the House of Blues is that they’re consistent, well-run, professional venues, they have good sound and they’re clean. I guess if I had any complaints, and I don’t drink anymore so I don’t know, but it seems like it would cost at least $100 to get drunk now, but that’s out of my hands."

Its previous location, dubbed the Mouse House since it was nestled into Downtown Disney, opened in 2001 and officially closed on May 29 of last year. The new space was initially scheduled to open Nov. 1, but was pushed back due to construction and permitting delays.

Now located in the back of the Anaheim GardenWalk, taking over the space of the old UltraLuxe Theaters, it’s a two-story, 44,000-square-foot concert venue, bar and restaurant that includes a 2,200-capacity main concert hall, a 400-capacity room dubbed The Parish, a 175-capacity Foundation Room/VIP Club and a much larger kitchen, restaurant space and bar areas than it had in the past.

As Social Distortion prepares to be the first act to grace the brand new stage, with support from Texas-born country/Gospel singer-songwriter Paul Cauthen and country singer-songwriter Jade Jackson, Ness said the band will also be celebrating the 25th anniversary of its album "Somewhere Between Heaven and Hell."

Playing through that record and, of course, its numerous hits, Ness shared that although the new songs he’s been working on for the last few years aren’t entirely finished, he may just decide to debut something fresh in front of the hometown crowd.

"That’s never stopped me before," he quipped about his songs not being complete. "I was playing ‘Sick Boy’ for probably a year before I finished it and no one seemed to notice that I was making up the words as I was going."

Like Social Distortion, these artists have all have a rich history with House of Blues in Orange County and some pretty fond memories.

For Thrice, graduating to headline the former 1,000-capacity space was a huge milestone coming from its sold-out gigs at the 250-capacity Chain Reaction in Anaheim in the late ‘90s and early ‘00s.

"Our booking agent was like ‘You guys are going to play there’ and we were like ‘What? You’re crazy,’" vocalist-guitarist Dustin Kensrue recalled with a laugh. "It was sold out and it was mind-blowing to us. It was a big moment for us and our parents, too, because they had kind of been eyeing us with some suspicious for a while, like what exactly we were up to. So, it was a big confirmation that this was something that was really cool and it was growing."

The band also filmed its live DVD there on May 28, 2008, and later released it as a triple-disc set that included two live CDs and the concert DVD. Though Kensrue said he was sad to see the old spot go, he’s excited for the new venue.

"It’s a little bigger setup, which will be good for fans and bands alike," he added. "I love being able to see shows in Orange County now that I’m back here. Back in the day, we’d have to drive to L.A. or Riverside because there weren’t a lot of mid-sized, bigger venues, but now House of Blues is stepping up and the Observatory, so there are some good options for bands to come through. It seems like Orange County has become much more of a destination on tours than it used to be."

Monique Powell of Save Ferris grew up going to shows at the House of Blues Sunset, seeing Bad Religion there more times than she can count, and Save Ferris also sold-out the old Anaheim venue a couple of times before going on indefinite hiatus in 2003. Powell reformed the band with a new line-up in 2013 and is currently on a tour, which wraps up with the show in Anaheim.

"It’s so profoundly important what they’re doing," she said of House of Blues. "You think of venues as purely money-making ventures for the people building the venues and the investors, but it’s really important for the cities as well. It keeps live music going and gives us, the artists, the ability to make a living doing what we do. I have to say, too, that hands down my favorite venues to play across the country are the House of Blues venues because they feed us better than anyone else. You also pray that you’re playing on a Sunday night so you can roll in early enough for the Gospel Brunch."

Orange County ska-rock goofballs Reel Big Fish, who are currently out on tour celebrating the 20th anniversary of their sophomore album, "Turn the Radio Off," which found mainstream success with the single "Sell Out," just want to bring "good vibes" to the new venue, vocalist-guitarist Aaron Barrett said.

"We’ve played House of Blues venues all over the country – Houston, Chicago, New Orleans – and we played in Anaheim a lot, we even filmed out first live DVD there," he said. "They’re always just really cool venues and we like they way they’re all decorated. They each have their own cool look and they treat us really well and the sound is always good. I can’t wait to actually see the new House of Blues in Anaheim."