David T. Little was inspired by a display case at his high school to write his first opera. This work has been nominated for a Grammy award 18 years later. 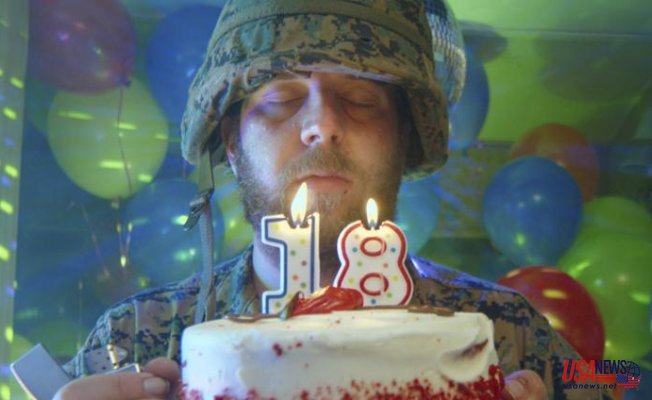 "Soldier Songs," a one-hour-long work for baritone/orchestra septet that depicts the horrors of war as well as the PTSD many veterans are facing.

The song asks the singer to play a variety roles quickly, including a boy who fantasizes about going to war ("I want to become a true American hero"); a soldier who is dazed by the constant danger of bloodshed and death around him ("This movie has gone out of control... Someone yell and a grieving dad were notified that their son had been killed ("Two Marines came into my house ...").

The composer recalls how the piece was born when he visited his school. He was in 2004, three years after the attacks and noticed a drastic change in the space outside of the auditorium.

Little stated that instead of pictures of proms, there were photos of friends and graduates in uniform wearing machine guns. It was shocking to me. I didn't get it. It was difficult for me to understand why I made that decision. I felt distant from the military."

He interviewed and recorded former classmates who served in Iraq and Afghanistan as well as family members who fought in Vietnam and World War II. They provided the basis for the libretto, and their voices were incorporated into the score.

"The No. Little stated, "The No. "So, the piece was about the difficulty in talking about the experience.

"Soldier Songs" was first performed in 2006. Since then, it has been performed in many different settings with great success. Opera Philadelphia made it a movie for its streaming channel after the pandemic.

Marc Scorca, President and CEO of Opera America said, "It's almost like a lot more projects emerged from the crisis COVID."

Johnathan McCullough was a Curtis Institute of Music graduate who was asked to perform and also direct the movie. The film was shot on the grounds and in eight days at the Brandywine Conservancy. This Conservancy is the site of a historic Revolutionary War battle. Only props were a trailer home in disrepair and its contents, some of which spilled onto the lawn outside.

McCullough was interested in veterans' PTSD after hearing from his fiancee who is a psychiatric resident about the cases they encountered at the VA.

McCullough stated that McCullough had been thinking about the matter for over a year. He also had all the scores. "At this beat on this note, i do this, and so forth."

James Darrah, a veteran director, assisted McCullough in his dual role. McCullough stated that Darrah was his set of eyes while McCullough was in front of camera.

Corrado Rovaris was the music director of the company. The score was recorded on a soundstage. This allowed McCullough, who is a singer, to perform live during filming without the need for lip-synching.

The result was praised by critics, while others found it even more powerful than the original. McCullough's "arresting adaption," Steve Smith stated in The New Yorker that it "vividly amplifies the impact of Little’s words and music."

Opera as film, as distinct from a video of stage productions -- is a rare thing. "Soldier Songs," one of the five Grammy nominees this year for best opera recording, is exceptional in that respect. Two of the other nominees are Live in HD transmissions of the Metropolitan Opera: Philip Glass's “Akhnaten” and Francois Poulenc's “Dialogues of the Carmelites.” The two remaining recordings are audio recordings: Bela Bartok's „Bluebeard's Castle” with Susanna Molkki conducting soloists, and the Helsinki Philharmonic Orchestra; Leos Janacek's „The Cunning Little Vixen” with Simon Rattle conducting soloists, and the London Symphony Orchestra.

No matter what happens, Opera Philadelphia has been "given an extra bump" by being nominated, according to David Levy (vp artistic operations).

Levy said, "We've never had a connection with the Grammys before." "It's wonderful!"