A teary-eyed Alan Barillaro of Chippawa, Ont., thanked his three little birds — his children — as he accepted the best animated short Oscar for Piper on Sunday.The six-minute film, produced by Pixar, depicts a baby bird and her mother trying... 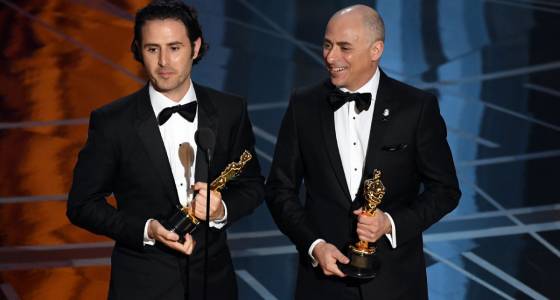 A teary-eyed Alan Barillaro of Chippawa, Ont., thanked his three little birds — his children — as he accepted the best animated short Oscar for Piper on Sunday.

The six-minute film, produced by Pixar, depicts a baby bird and her mother trying to dodge waves while searching for food on the beach.

“My parents, my wife, Nancy, my three little pipers at home who inspired this story . . . I love you and may you always have the courage to face your fears,” Barillaro said in his speech, in which he also thanked his supporters and mentors.

The film had a coveted spot in theatres, screening before Pixar’s feature-length smash Finding Dory, which was 2016’s top-grossing film.

Piper was one of three projects from Canadian animators in contention for the best animated short Oscar.

The others were Pear Cider and Cigarettes, directed by Vancouver’s Robert Valley, and Blind Vaysha by Montreal’s Theodore Ushev.

“There’s a legacy of great animation from Canada that you feel really proud to be a part of,” said Barillaro during an interview leading up to the awards show.

He’s contributed to some of Pixar’s biggest hits, including A Bug’s Life, Monsters, Inc. and WALL-E.

A graduate of Sheridan College in Oakville, Ont., he fell in love with drawing as a child and studied at the Animation House in Toronto.

For Piper, he used beach sounds and a whimsical score rather than dialogue to help convey the story.

His reference footage came from underwater GoPro images captured by his 9-year-old daughter and 7-year-old twin boys during a family trip in Kauai, Hawaii.

He called the Oscar nod for his first foray into direction “surreal” and “humbling.”

“When you start these films, you’re just trying to convey something very personal to the audience . . . You don’t really think beyond that when you’re making a film,” said Barillaro.

“You’re doing your best as an artist just to say what you’re trying to say. It’s all quite an honour, and a little overwhelming.”

With files from Lauren La Rose

With files from Lauren La Rose