CaptionCloseLOS ANGELES (AP) — Ezra Edelman's nearly eight hour meditation on O.J. Simpson and the culture of race relations in the United States "O.J.: Made in America" emerged as the winner of an unusually strong and even thematically similar best... 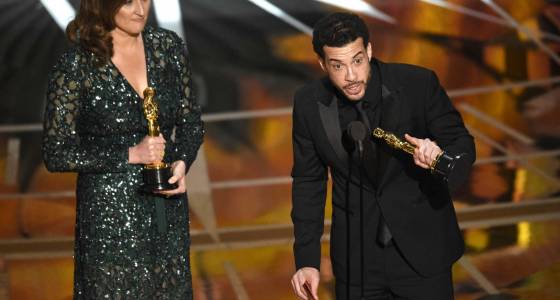 LOS ANGELES (AP) — Ezra Edelman's nearly eight hour meditation on O.J. Simpson and the culture of race relations in the United States "O.J.: Made in America" emerged as the winner of an unusually strong and even thematically similar best documentary category. In his acceptance speech Sunday Edelman dedicated his award to the late Ron Goldman, Nicole Brown and their families.

"This is also for other victims, victims of police violence, police brutality," Edelman said. "This is their story, as it is Ron and Nicole's."

"O.J.: Made in America" was up against three other films in the category that were explicitly about race, including Raoul Peck's James Baldwin documentary "I Am Not Your Negro" and Ava DuVernay's mass incarceration examination "The 13th."

Others in competition were Roger Ross Williams' autistic coming-of-age portrait "Life, Animated" and the European migrant account "Fire at Sea" by the Italian director Gianfranco Rosi.

The documentary category was an unusually diverse one behind the camera as well — four of this year's five nominees were directed by black filmmakers.

Clocking in at 467 minutes, "O.J.: Made in America" is also the longest ever Oscar-winner. The previous longest was "War and Peace," the foreign language winner from 1969, which was 431 minutes long.

Its length and format led some to wonder whether or not the documentary even qualifies as a film, or TV, where it aired in five parts on ESPN.

Edelman, in his speech, called it an "untraditional film" and thanked ESPN for allowing him and his team the canvas to tell the story.