CaptionCloseNEW YORK (AP) — The New York Times will broadcast a commercial called "The Truth Is Hard" during Sunday's Academy Awards, just days after the company and other news organizations were blocked from joining an informal, on-the-record White... 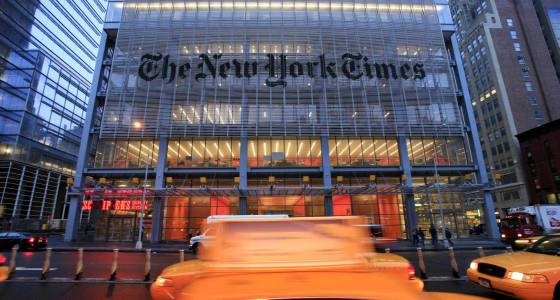 NEW YORK (AP) — The New York Times will broadcast a commercial called "The Truth Is Hard" during Sunday's Academy Awards, just days after the company and other news organizations were blocked from joining an informal, on-the-record White House press briefing.

The 30-second ad includes audio from voices in the vein of news clips, talking about certain "truths," from "the truth is our nation is more divided than ever" to "the truth is the media is dishonest." It is the first television advertising from the Times since 2010 and its first brand-focused television ad in a decade.

The clip, also posted on the Times' official YouTube page, has more than 1.5 million views since it premiered Thursday.

Its airdate on ABC during the Oscars comes two days after the Times, the Los Angeles Times, CNN and other news organizations were blocked from a White House briefing after press secretary Sean Spicer restricted the number of journalists who could attend.

The Committee to Protect Journalists condemned the move by the White House, and it marked another sign of struggle between news media and President Donald Trump.

On Friday, Trump said reporters shouldn't be allowed to use anonymous sources. He has chafed at a number of anonymously sourced stories, including numerous reports describing contacts between his campaign advisers and Russian intelligence agents, which the White House has sharply disputed.

Spicer said earlier this week that he didn't think Trump would watch the Oscars on Sunday.

On Friday, the Academy of Motion Pictures Arts and Sciences announced that Meryl Streep will be a presenter during the live show. Streep criticized the president during her speech at last month's Golden Globes, especially Trump's apparent mocking of a disabled Times reporter.