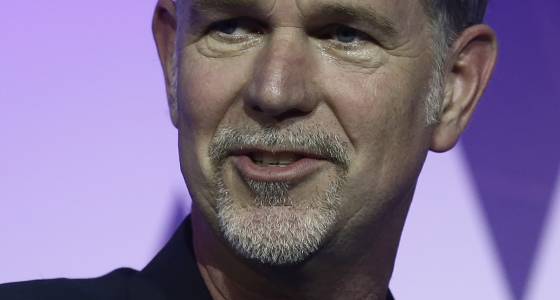 Reed Hastings has been a critic of the temporary travel ban, which Trump hopes to revive in a revised form this week, and told The Associated Press on Tuesday that some of his co-workers had gotten caught up in it.

"We had Iranian and Iraqi employees who were unable to come to work," he said on the sidelines of the Mobile World Congress, the wireless industry's biggest annual gathering held in Barcelona, Spain.

Netflix was among dozens of tech companies that publicly opposed the travel ban out of fear that it would stifle innovation.

U.S. politics has become as gripping as a TV drama but Hastings says that Netflix, the distributor of the show "House of Cards," is not planning a show based on Trump.

"Maybe someday, but it's better to make a show about things in the past so you can have some perspective," he said. "We let the news channels do the things that are current, while hoping to provide a relief from politics to people on both sides."

One of Netflix's biggest hits has been "House of Cards," a fictional show about the ruthlessness of politics in Washington that it first distributed in 2013, well before Trump's rise to power.

"We are focused on international expansion, mainly in Europe and Asia," Hastings said. "It's just the beginning of the Internet. We are producing all over the globe with great success, now also in Spain, France, Germany, the U.K., Turkey, India, and even Japan, with anime shows."

Netflix, which has some 93 million subscribers across 190 countries, is riding the success of some of its own productions, having won its first ever Oscar this week for the documentary "White Helmets," about Syria's humanitarian aid force.

Hastings expects the market competition to toughen, however, with traditional broadcasters increasingly moving online especially with the gradual improvement of handset screens and connections.

"I think broadcast television is really going to move to the Internet, so that current TV networks will offer their videos online, just the same as Netflix and YouTube."

The improvements in wireless 4G and 5G technology is likely to encourage the trend of people watching movies on mobile screens. People can break up their viewing during commutes or lunch hours, personalizing the time in which they consumer entertainment.

"We would like to continue to improve the mobile plans in order for everybody to enjoy unlimited video viewing," said Hastings. "I think it's possible because we are getting more efficient at video data, so that the networks are not congested. That would be a big breakthrough."